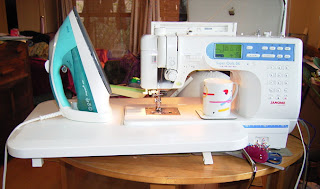 On the evening before Memorial for Broken Needles Day a new sewing machine arrived.
The day before, the iron stopped working so later in the week I bought a new one of them too! As you can see the new equipment is all huge and built around an icy blue theme.

The sewing machine is a SuperQuiltDX made by Janome, a Japanese company, who are also the world's largest manufacturer of sewing machines, partly because it also manufacturers a lot of the machines sold by other companies. Or does it own the other companies? I am not quite sure... I bought the machine for a lot of money (205,000¥) from Janome's local dealer in Fujisawa. I could not find this machine in any more usual shops (like the big electrical stores which, surprisingly, mostly seem to sell rather old models), on the web or even at the specialist stitchin' shops. I was so impressed with myself for finding the dealer only a 20 minute bike ride away that I wasn't going to waste time shopping around for a cheap deal!

Anyway, the SQDX is the Japanese version of the 6600, which can be found in places like Europe, Australia and North America. The only differences (as far as I can tell) apart from the casing colour and language details are that my version doesn't stitch alphabets and also has slightly fewer decorative stitches. One of the cool things about the machine is the oodles of space to the right hand side of the needle. As you can see, this allows one to more easily enjoy a nice cup of tea while stitching. The Janome 6500/6600 have their own yahoo group!

The iron is a T-Fal (or Tefal depending which country you are in), and its most amazing feature is that it flattens things. My old iron did not do this. Reminds me a bit of our old vacuum cleaner which did not pick up dust. At least my previous sewing machine - cheapest Brother that did not sport Mickey Mouses on the casing - did actually do stitchin'!
Posted by jules at 2:21 pm