From scraps to boxers

For some unfathomable reason, James didn't want photos of his lovely self in his underwear thrown all over the interwebs. So here we have a rather dull couple of photos of James' new boxer shorts pinned to the front of a chair. 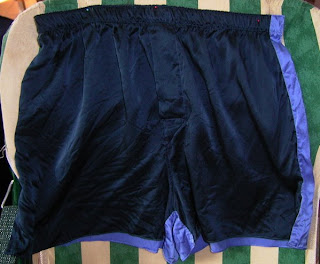 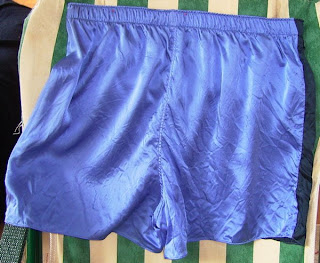 The shorts are made using the leftover pieces of silk from my suit jacket lining. The fabric pieces left little room for manoeuvre and, unless one were to start making stripes, there was no choice as to which colour was the front and which the back. The first photo shows the front. The pattern is Jalie 2326, which contains a large range of sizes from boy to bloke. James' measurements are closest to size V and I added a 1cm to the seam allowances because the silk frays a lot. I decided to practice a rolled hem so including the extra 1cm, these are bit longer than they might have come out. That, however, is a good thing because James is so tall. There are only very small scraps of silk left now, and I used up the thread I bought to go with it, which makes me glow with the illusion of economy. Being so shiny, these shorts really do look like the shorts boxers wear, but I am told they are very comfortable and I hope they will be good for wearing round the house, as "loungewear", now it has got hot again. Probably these are on the baggy side, and in a less drapey fabric perhaps I should make them a bit narrower.
The shorts were fundamentally simple to make with only two pattern pieces, plus an elastic waistband, but I find sewing anything in silk charmeuse quite tricky. The instructions on the pattern are terse, and really give no explanation or feeling of where they are heading unlike, say, the instructions on a typical Kwik Sew pattern, which teach you how to sew. This gives me some nervousness since it would be very easy to miss a step and makes me wonder if it might have been easier to not bother with the instructions at all! Actually I only started work after checking some pairs of James' boxer shorts to see how they were really put together. One thing I noticed too late but must write down for reference is that, in RTW boxer shorts, the elastic waistband is not stretched much over the front fly area, where there are several layers (4-5) of fabric together. The consequence of over stretching it as I did is a curve which does not lie completely flat when the shorts are worn.
Posted by jules at 2:50 pm No comments: