Help - someone in the lunch queue just said they'd heard of my blog. Agggh! so I'd better add an update!


Travel is a good incentive for stitching. With a 2 month trip to Colorado coming up I carefully considered what would be most useful, told James he didn't need anything, and finally decided to try to improve the stretch "pants" pattern, left over from last year's class, and also make a mid-weight jumper. We're now on the trip and the clothes are being worn simultaneously, so I can economise on both blogging and photographic pixels. 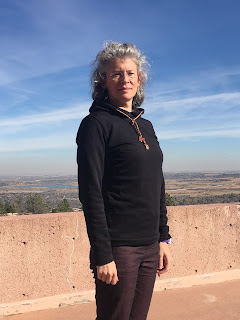 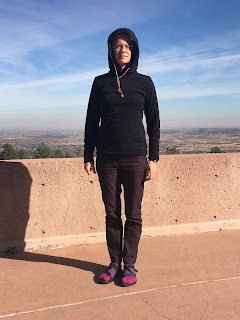 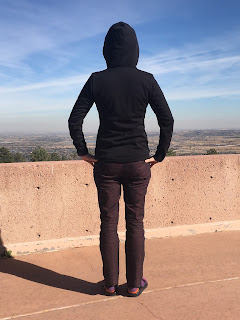 It looks a bit sunny for such clothing, but the air is actually quite cool for much of the day, and we just popped out of our over-cooled indoor environment to take these photos.

For the trews, all I did to the basics was alter the crotch seam (took a bit off the back and added to the front). The pattern is unfinished at the top and so I generally cut it long, fit the trews and then decide where the waistband should go (according to mood), draft the waistband and stitch. The waistband line comes out as a pretty weird shape being high at the back. This time I decided to experiment and obey it, cutting a 4-piece band, which produced an interesting result and a bit of a gap at the back in the waistband when I sit down. So I probably over-did it a bit and should got for less of a parallelogram for the back piece. Other than that, they are a really good fit and don't need a belt. So now I have to just not change shape, and I've got pattern that fit for both stretch and no-stretch trousers! The fabric is a dark maroon stretch denim that I bought at the Harrogate show last year.


For the hoody I am a bit less certain that I've got it sorted. This one is made from adding width in arms and body to the same pattern used for the rollneck made recently. For that one I fairly radically reshaped the underarm, and maybe it was a bit too radical. The fabric is Polartec Powerstretch so very stretchily forgiving, but I've a feeling it would be a bit tight in a less stretchy fabric. I seem to be struggling to find the right kind of mid-weight as I try to replace this, "Mountain Hoodie" - 2006, which is getting quite worn, and is worn almost every day in British summer! Having said that, this new one is a much better weight for a mountain/exercise hoodie, as it is quite a bit warmer. 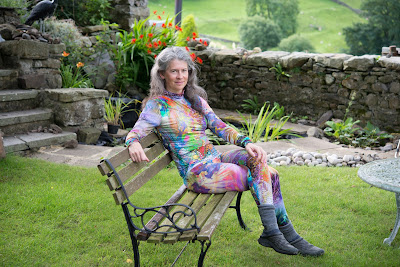 My wardrobe continues to suffer from climate change. Insufficient styles for cold weather and too many quite worn out summer clothes. Something must be done. Summer isn't really summer here, shorts and T-shirts a rarity, so long base layers seemed like a good idea.

Leggings
The leggings that I use most for running and cycling cost about 35USD and they are full of holes from when I've fallen off my bike. How hard can it be to make them? The difficulty is actually in finding really good fabric, and I have yet to find a nice 2-way stretch cotton lycra. That's the power that these big sports companies have - they get to specify their own fabrics. Anyway, I had the nice colourful synthetic quite gently (2-way) stretchy fabric and also some violent pink and black stripes in a fabric that would probably be classed as dancewear fabric. So, I drew round a pair of lycra leggings, and adjusted the inside-legs on the pattern so they would match, and that was about it. I made one pattern piece as I thought these patterned fabrics would be better without a side seam. Inside leg seam, crotch seam, 2 cuffs and an elastic waistband and that's it. Made it first in the pink stripes and have used them both running and cycling. The fabric is quite thick for lycra and so they are a bit warmer than normal lycra leggings, which is a good thing as standard lycra leggings are usually a bit cool for round here. The second pair are in the colourful fabric. It is a very pliant fabric so quite soft, and probably less suitable for sports. Hope they are warm enough to be worn at least occasionally in Yorkshire, but they may also come in handy for travel, being light and comfortable.

Rollneck
I have quite a lot of t-shirts, and although I wear them under things, they don't often see the light of day any more. I usually wear 2 layers over them, even in "summer". I seem to be short of middle layers, and I want something that looks nice under jumpers with a variety of necklines, and for that reason I thought rollnecks might be a good idea. So I revisted my long sleeve t-shirt pattern. There is something wrong about the underarm on all my home made t-shirts which fell too far from the body so I moved the underarm point in quite a bit (4-5cm - I basically made the underarm and hip fall at the same width which makes sense in that my bust and hips are about the same circumference), and then walked the seams to make sure everything would line up.  It is much improved, and seems close to perfect fit but I wonder if I should make a slightly less drastic alteration for a less stretchy fabric.  I guess I will have to try and see!

Ensemble
I don't really intend to wear the ensemble in public. Lucky that no one reads this blog. I think it might scare the sheep. I already get comments from people in town on the brightness of my trousers! 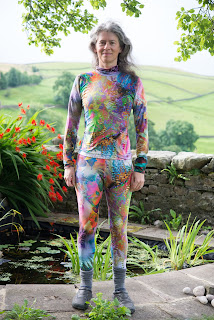 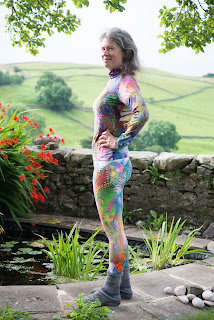 For some fell running races it is mandatory to carry full waterproofs including non-detatchable-without-scissors hood. James already has the waterproof trousers, of course. He also has a mountain climbing Goretex and a cycling Goretex. The latter is 500g, and would do, but it is a bit baggy and doesn't fit in James' tiny fell running rucksack. He asked for smaller and lighter. For running, one wants something fairly slimline, so I started with the pattern for the cycling windproof. If using this pattern again for cycling I would add more ease across the back, as the stitching tends to come undone at the back arm seams, but for running it should be fine. I had some fabric - a nearby outdoor store that made much of its own gear closed down recently and sold off a few metres of fabric amazingly cheaply. The fabric is heavier than Pertex and clearly waterproof, but I'm not sure how breathable it is - possibly not very. However, with pit zips and a zip down the front of the jacket, there are ventilation options. 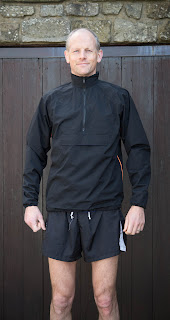 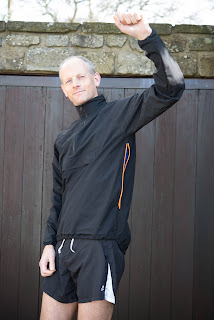 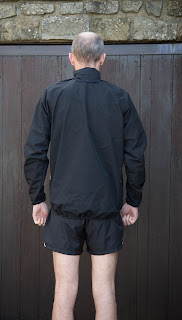 The only really tricky bit was devising the hood. James decided that the snug collar of the Pertex windproof was desirable when the hood was not in use, so it seemed that a hood that tucked into the collar would work. James' cycling jacket has that kind of hood, so I copied that hood shape. What I did wrong was fail to allow for the space occupied by the rolled up hood inside the collar, so it is a bit tight. However, this is mitigated somewhat by the extension tab at the back collar (also copied from the cycling jacket) which means that the hood does not have to be completely inserted into the hood.
And here's the hood. It now has a single snap in the middle of the centre front, because for running James wants it to fasten under his chin, not over his mouth. 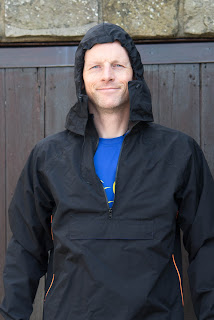 Of course, I minimised seams, but I also found a nice roll of seam tape on EBay and taped the raglan seams as well as the pocket area. Doesn't seem much point taping the underarms, given the pit zips. But perhaps I will have to. The rules say, 'The FRA regards "waterproof" to be a garment marketed as "waterproof" (i.e. not just “windproof”) with taped seams.' Now that's tricky - this jacket isn't being marketed at all! The vulnerable area for water ingress could be the front zip as there is no storm flap. Looking at the running jacket market it is clear that the really lightweight ones are not really very waterproof and just for emergencies (or even just for carrying!), as they are made of very thin fabric. My version is actually quite a sturdy mid-weight laminated fabric. Final weight, 302g before the last snap was added, so probably 305g, which is very competitive given that published weights are for M-size jackets and this one is of course an L (well ... XXL length and M width ~= L).