This is a fluffy raglan V-neck jumper made from a lovely soft wool/angora/lycra mix knit bought from Yuzawaya in Kamata. Angora wool comes from angora rabbit fur but mohair is what you get from angora goats. I suppose this is probably the rabbit version, but I am not totally certain since Japanese use of foreign words is not always related to the common usage in the foreign tongue.

This is a repeat sewing of KS2561. This time I made View A which is a short sleeved V-neck T-shirt, but using the long arm pattern from the previous sewing. So all I actually changed in the pattern used last time was the neckline. I tried very carefully to do it correctly but somehow it ended up with the V right overlapping left, which is not the manly way, apparently. Other than that the V came out OK. 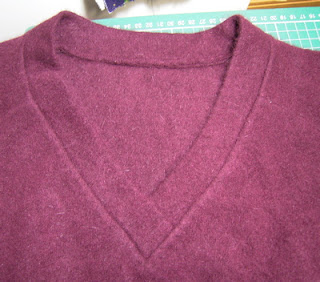 I interfaced the neckline with lightweight interfacing for knits and also basted lots which probably helped things not get stretched out of shape. The fabric was quite stretchy but without good recovery. I used steam with very light (or no) pressure from the iron to shrink it back into place. I've seen it often written on PR how easy it is to reshape wool using steam but had never experienced it before. It certainly is a nice quality of the fabric. I used the almost invisible hand hemstitch that I learned from Kenneth King's tailored jacket CD to stitch down the seam allowances inside the V-neck since I thought that if I tried to machine topstitch it, it would be bound to stretch, and I didn't think leaving the SAs hanging as recommended in the KS instructions was likely to be very satisfactory in this somewhat chunky fabric. 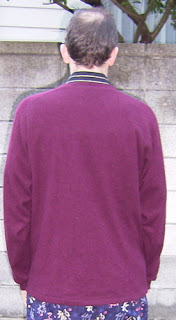 The kerfuffle came with trying to get the arms the right length. On the previous shirt I shortened the cuffs during the stitching process. I should have adjusted the arm length on the pattern at the time. Anyway this time I ended up cutting an inch off the bottom and stitching 5/8" seam allowance on the cuffs (the rest of the pattern is 1/4" SA). I have now adjusted the pattern and taken 1.5" off the length, so next time the cuffs can be inserted with 1/4" SA and it should fit perfectly!

It is interesting how easily the long sleeve T-shirt pattern has become a jumper, but then I suppose it was quite a baggy T. I did not intend the jumper to be quite as warm as it is. The fabric didn't seem that thick to me in the shop. Perhaps it became more dense through pre-washing, or perhaps I am just not very skilled at judging these things.

review
Posted by jules at 5:20 pm No comments:

PHEW! If anyone actually ever read this blog they'd be thinking I'd given up stitchin' but here, at last, is what I have been toiling over! I wouldn't like to try to add up how long it took!

This is the jacket of the Vogue loose fitting men's four piece suit (ie jacket, waistcoat, trousers and shorts!). We sometimes attend parties that specify "lounge suit" as the dress code. Almost all the men turn up in black suits which is very dull of them. James' other suit is also black and more suitable for a Scottish winter than a Japanese summer. So now he has something jolly to wear instead.
I think the Vogue instructions were OK, although there may have been a couple of mistakes. For example, I didn't see where the lining arms are attached to the body. On the whole I did not follow the Vogue instructions, but those of Kenneth King's (hereafter KK) Tailored Jacket CD book instead. I followed the Vogue instructions for the pockets and for checking that the hems allowances were going to work.
Originally my intention was to use the Vogue instructions but I became an instant convert to tailoring when I discovered just how much the fusible interfacing altered the fabric. I also didn't want to mess up the breathable hot weather qualities of the tencel fabric by glueing some interfacing to it. It really seemed to defeat the object and was clearly going to add weight. The Vogue instructions have you fuse all the body pieces right at the start - and this was the point at which I booted up KK's CD full of instructions. The instructions in this CD are excellent on the whole. They are incredibly detailed step by step instructions. I had a couple of occassions when I couldn't see KK's geometry for a while but I think I got it in the end. The only fault with the book is that it seems to think that a jacket can be knocked together in a "long day". Bah humbug! It takes days and days and daysssss...
My version is, however, not a properly tailored jacket. Mine is meant for the heat of summer and jackets here that made to cope with Japanese summer (I've been to the shops to check) are really hardly interfaced at all. Indeed sometimes they are almost transparent. Husband also desired a very soft informal and crinkly looking jacket (he says he wants to look like a rhinocerous) rather than smooth tailored lines. So I didn't make shoulder shields or use canvas in the interfacing. Instead I used cotton batiste for all interfacing. I made the shoulder pads using a mixture of the Vogue pattern and some instructions I found online.
My version looks softer than that on the pattern picture due to the different construction methods employed (sewn in interfacing vs fusing). The pattern went together fine so I don't have any complaints. Of course not all the dots lined up exactly with the KK instructions so there was a bit of guesswork and it didn't turn out perfectly. For example, 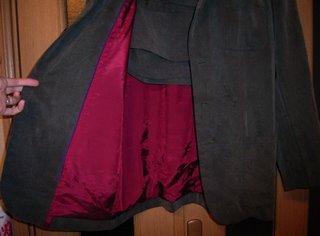 the (KK) piping in the lining should have gone lower down.
Following KK's instructions I really like the way that the jacket was shaped. It is amazing - the finished article has this incredible lapel that lies in a beautiful curve even though the fabric is really soft and no firm interfacing was used. All done by steaming things in curves and basting with silk thread. I don't have any hams or a sophisticated iron or half the tools required by the CD. I managed with a normal iron, a towel and a sleeve ironing board. The tencel is pretty hardy stuff and survived the trauma of my inexpertise! The let downs of my construction are the buttonholes which are not the sort with the nice curve at the end. My machine only has one sort of buttonhole - the straight 4 step sort - I have experimented on scrap cloth with making them by hand but they look awful so I just did the machine ones, which aren't that great either!
Apart from that I made plenty of mistakes like not realising that the piping should all be done in one long piece, not realising that I should have drafted the under collar and front into a single piece before cutting out, and accidentally snipping bits of fabric when I was supposed to be cutting threads, and stitching wonky seams and not getting things to line up properly. I have a similar feeling to when I made the Vogue trench coat which also had a lot of steps - with one mistake in each step one ends up feeling like the whole thing is just a load of errors. However the trench coat has held up really well with only a couple of small repairs so I am hopeful that the jacket wont just unravel the first time it is worn.
Fabric Used: Green Tencel for the "fashion fabric", red and purple bemberg lining (which KK hates!) and cotton batiste for the interfacing.

I made a muslin out of muslin in size 40 and then added an 1.5cm to the arm length and half an inch width at the underarm, tapering the arm to the normal cuff size and keeping the excess all down the side seam of the jacket.

Even now, only an hour or two after finishing it I think I would sew it, or at least another tailored jacket again. It was really quite a lot of fun. I do feel quite a sense of acheivement at having done a jacket almost properly! My technique of not bothering too much with the multiple mistakes and instead thinking "I'll do it properly next time" does make me want to do it again better. 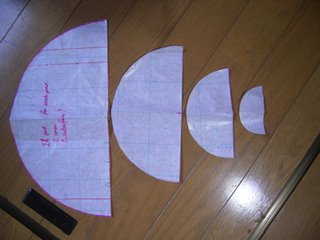 Here are some instructions for making shoulder pads. I also had the Vogue shoulder pads pattern, but since it was for ladies shoulder pads I thought it wise to take measurements from the jacket muslin. I used non-fusible cotton batting for the padding. 4 layers - one for each of the pieces shown in the photo. Then I used a kind of thinner cotton stuff - maybe flannel? using two of the largest pieces. Altogether this made the desired 10mm thickness. I pad stitched all this together in a curved shape according to the Vogue instructions. 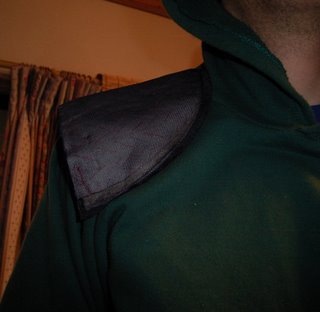 Then I decided to stick fusible tricot over the outside to make a smoother finish. I am not sure if that last part really helped in the end, although it kept the pads clean while they were floating around the house before the jacket was sewn. I discovered that the important thing about shoulder pads is to have a nice smooth curve at the thick end so that they look smooth in the sleeve cap. Steaming after installation helps to greatly improve this.
review
Posted by jules at 9:02 pm No comments: