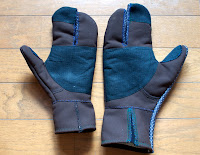 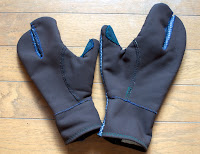 Found some Polartec Windbloc at Rockywoods and made lobster cycling gloves for him and her. The fabric description says - "Brown Nylon Canvas face and Cream Shearling back. This fabric would make a nice jacket, vest, hat, mittens and other outerwear". The fabric is pretty stiff and thick, so these were put together slightly differently to the previous pair. I trimmed the fleece from the edges before stitching, overlapped most of the seams, handstitching where required, and made the gusset between the pincers from the more pliant windstopper fabric used for the last pair. The photos show one hand from each pair. James' pair came out too tight, because I stupidly used the same pattern as before even though this time the fleece was on the inside, rather than outside. Some surgery has fixed this; cutting them open and adding a windstopper gusset down the thumb. As well as giving the required room, this gusset does make the fit look better. I suspect that fitting a similar gusset down the index finger would further improve the fit. Some of my gloves do include such a thing, although it is clear from looking at all our pairs of gloves that there are many acceptable ways of constructing a pair of gloves.
Of course now it is warming up here a bit, so these wont get properly tested until next year, however, mine did keep my hands warm and dry in a relatively cold and rainy day recently. James' have only just been finished so are not tested yet.
Posted by jules at 5:21 pm No comments: