Stitchin' makes you rich and famous 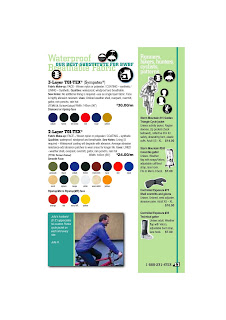 I bought the Pertex for James' cycling shirt and trousers from Textile Outfitters. At some point during email correspondence about seam sealers they requested a photo form me, and here it is on p11 of their 2007 catalogue! As if the fame itself were not enough they also gave me a coupon valid for several months valued at the princely sum of $25 (Canadian).
Posted by jules at 7:57 pm No comments:

New Look 6370 is a fairly short frock intended for lightweight and possibly sheer fabrics. View D. I bought this pattern more than a year ago, and then bought some fabric for it. Then realised my tricky-fabric skills were non-existent so I took Sarah Veblen's sheer fabrics class in order to be able to make the dress. The pattern is labelled easy. But it is not easy or fast making a bias frock in a slippy dippy lightweight fabric! Key thing I learned from the sheer fabrics class was pick an easy pattern and to take time to make the fabric behave properly.

The practice was made in cupro (a rayon like lining fabric) and is basically slammed together - took me a long day from starting cutting out - none of the seams are finished or the arms hemmed, although I did get round to making the adjustments on the pattern pieces. My new sewing machine helped a lot too because with the clever acufeed system I didn't need to baste before stitching.
For the practice I cut 14 top and 12 from waist down in line with the measurements on the pattern back. I have adjusted this considerably. I took up the shoulders 2cm. I decided to also lower the underarm and bust dart by 1cm. I took in in 3.5cm on both sides at the bottom (ie 14cm total!!!), about 3cm at the waist tapering to nothing around the underarm. I've also reshaped the back to allow for sway back. I stuck a tuck in the practice frock to estimate this which can see it in the back view photo. Because of all the adjustments the tie is in the wrong place on the practice (2cm too high). the envelope.
Real Thing

Top layer is a green silk/rayon devore bought almost exactly a year ago from Borovicks Fabrics, Soho, London. The underlining is deep red silk geogette from Sarah Veblen's on-line shop. Both these fabrics feel warm to the touch whereas the lining fabric I used for the practice frock feels really cold.

I don't think I made too many mistakes the second time around. The only problem really occured during construction of the neckline. The final result of the neckline lies much nicer than that on the muslin (partly because it was stitched much more carefully). However, I was rather shocked after stitching it because the back of the neckline was all baggy. Seemed I had managed to stretch the back neckline while sewing. I unpicked it and took in the top of the CB seam by about an inch. After much basting and trying on and helpful comments from James it seemed to work out OK.
The part I was not sure about was whether to completely sew up the arm/shoulder part. On the pattern the two sleeve halves just flap loose and when I tried on the dress these flaps tended to turn over revealing the underlining a bit too much. So I sewed the ends together. After soliciting the opinion of the PatternReview participants I decided to take an extra stitch in the middle of the sleeve to keep the general effect but lessen the amount the shoulders poke through. The photos are taken before this change was made.

After making the practice I altered the pattern but was a bit confused because I had so drastically reduced the ease. I emailed Sarah Veblen and my interpretation of her advice is that for a bias frock for someone quite small like me should cut with about 2-3" ease, baste together and then adjust. I measured the post-muslin-adjusted pattern and I was down to zero ease at the bust and even negative ease at the hips. Spot the drag lines on the photos of the practice frock! So I added 2cm to my pattern side seams and then cut out and basted the CB and side seams. I ended up not taking the hips in at all from this but taking the 2cm back out of the bust. Sarah's other advice was to "go with the flow", which I interpret as not trying to force things together that don't want to go, but letting the fabric fall/hang where it wants to. I found this very useful advice for all the seam sticthing. For example, the underlining fabric hung longer at the bottom of the dress than the top layer fabric.
For the flounce I made one flounce of top layer devore and another narrower (by about 0.5-1 inch) flounce from the georgette and then sewed them together at the top only. I did this so that the flounce would be visible and yet still be "flouncey". The flounces were hemmed with baby hems. Since the frock is cut on the bias I didn't finish the seams, just sewed them down to the underlining. Because of the multiple layers and the way they liked to misbehave, this time I did baste most things before stitching.
It is interesting how differently the frock hangs in this fabric combination than in the lighter weight less bias-stretchy muslin. As well as the quite large differences in the width fit, I had to take it up a bit at the back hem, and it still hangs a bit lower than the muslin.

This is a good pattern for sheer fabrics on the bias because it is basic with few seams and the flounce adds a bit of interest withought being too hard. It took me a lot of days to make this but I only had the odd hour here and there to work on it. Worked quite well since it gave the frock time to hang out and me time to consider the next move between sessions.
One might have to be a bit careful how one sits down in this frock.