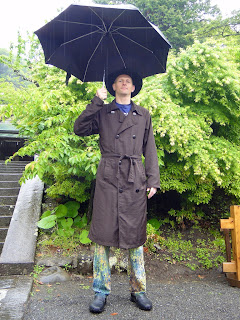 At last, many years after I made a trenchcoat for myself, someone (Vogue patterns) brought out a pattern for a men's trench coat! This is V8720. I'd considered making a coat for James - we even went snoop shopping in San Francisco last year to consider styles - but I had been very put off by the available patterns. On the verge of adjusting my trenchcoat pattern for James, luckily this pattern came out just in time to save me all the work.
The search for fabric was taxing. The idea was to make a coat with a softer drape, unlike the typical tight fitting straight-jacket style worn by the prim young salarymen in Tokyo (James is not prim!). I ordered swatches from Rockywoods and Gorgeous things, and eventually we chose some shiny and slightly crinkly dark brown slippery stuff. It isn't waterproof, but is hopefully showerproof,  and it cost quite a lot. I tested pretreating the fabric in various ways. Washing it seemed to shrink it a little, but more importantly it lost significant water repellency. So instead I ironed the whole yardage with a cool iron to preshrink it a bit so that it could be washed in the future if required, and also so that it would not shrink as I ironed it during construction. Getting the interfacing to stick down with the cool iron was a challenge, but I think it is all stitched down by all the edge and topstitching so it should be OK. It is rather softly interfaced (with pro-weft), and tacking down a fusible interfacing with the iron seemed preferable to sewing in interfacing, which would have made additional holes in the fabric! 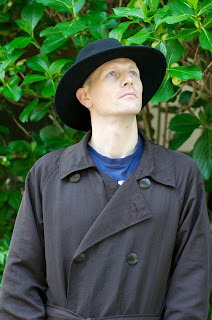 I had plans to line the coat, but the pattern is deliberately designed to be unlined, with carefully finished seams and large front facings. Since this version is meant for use in rainy season in Japan, when it is warm and wet, we decided to go with the unlined version. My feeling is that this will not aid the performance in wet weather as when it gets wet it will probably stick to the clothes underneath. The fabric is, however, very slippery so perhaps it will be OK. Time will tell. I finished the coat several weeks ago, and it has been quite wet in Japan ever since - but we have been away in a very dry part of the USA instead - so it had yet to be thoroughly tested. 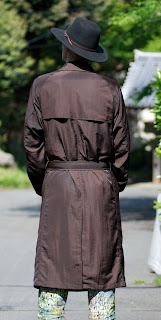 I happily used up some accidentally purchased (otherwise known as "what was I thinking?") cotton to make a test garment for fitting, adding several inches to the length of body and arms. I cut size 40 for the test, but ended up increasing the width across the back and shoulders, somewhat and fitted the size 42 collar pieces to the adjusted body. The resulting coat is perhaps a bit loose across the chest. The main mistake in construction (apart from sewing one pocket on upside-down and the other inside out, which I managed to recover from by sewing a new pocket bag onto the wrong way up one) was not altering the position of the lowest button after lengthening the garment. I think this button is too low, and will sometimes have to be released so that it does not restrict motion. The buttons are deliberately size 30mm rather than 25mm - I thought the over-sized buttons added a little something to the intended looser styling. Other changes from the pattern were to add a pertex lining (purple!) to the back flap piece, and also to stitch down the centre of the flap. The belt loops were fitted according to taste of the wearer, somewhat below his true waist. Otherwise I basically followed the instructions. I intend to include a belt buckle, but have yet to travel in to Yokohama to get one.
Posted by jules at 8:25 pm 2 comments: