Having already bought the fabric in Harrogate at the start of December, I convinced Pops to buy me this sweater for my birthday (27 December), so the pressure was on to complete the garment before we departed for Scotland on 20th December. As it turned out it only took about 24 hours real time, so was finished in time. I did the pattern work one evening and finished the sweater by the next evening.

Because of the lovely pattern of the fabric I decided a plain structure was best, so I adjusted my sweater pattern to have no taper in arms and no shaping in body. I also cut a "cowl" neck, which is basically a big roll-neck.

Wanting the stripes to go across the chest meant cutting on the cross grain, but this had the bonus that I need not make cuffs and instead put all the ends on the selvage. The sales person thought 1.5m would be enough, but I always buy more so had 2m. Even that was not enough for my original plan, which was to have the same stripe across body and arms. But it all fitted with the body pieces using one side of the width and the arms and neck the other. In the end I think this turned out for the best, as now the full patterning of the fabric can be admired.

One interesting thing is that the fabric stretches a lot almost like it had been cut on the bias. This means the lack of shaping was a good move, as the sweater anyway falls to the contours of the body, but it also means that the length of the finished garment is somewhat variable depending on its mood. Thus sometimes I roll up the arms to make cuffs. It is quite fun because the pattern at the end of the arms of course matches the pattern of the base of the rollneck. 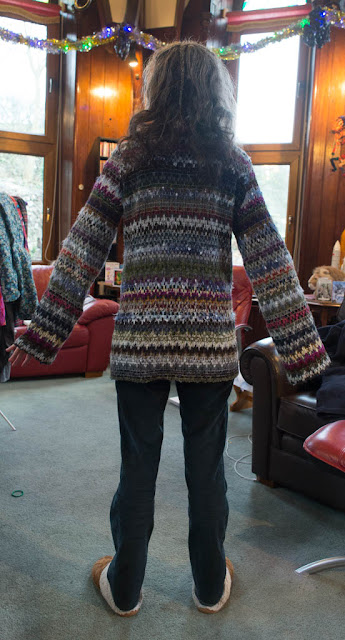 Made from jigsaw fleece bough at the HIC show.

A quote from the first time I used this pattern to make jimjams, "Simplicity 7045. Made Large size (should have made Medium but pattern is L-XL)" It's deja vu all over again! So ... the pattern was somewhat too wide, and I took out an inch from each shoulder seam. It could be a little more snug around the neck so I could have taken another 0.5-1" out down the back at the back of the neck, although maybe would need to put some back at the underarm, which would have been a rather more complicated adjustment. I added 5" in total to the length, 3 above the waist and 2 below. We positioned the waist loops and pockets according to personal preference of the victim. James wanted lots of wrap around, so I added an inch or two to the cross-over flap it at the front, and adjusted the other pieces (collar, facing) to work with this. I thought the sleeves were right, but that's because I misunderstood the construction which involved a quadruple thickness cuff at the bottom. So, they were a few inches short, but managed to work out a different style that can be folded up manually. The pattern says something like "easy" on it, but I think this is the largest thing I have ever made, which made for quite an interesting challenge. Fabric mustn't be stressed while sewing, and so checking that bits of it weren't caught under a chair, wrapped round a knee or stuck in a cat was quite important. Glad to have lovely large sewing machine for this project!

The pattern seems very wasteful on fabric as each collar and facing is a single piece. I was using James' John Lewis dressing gown so I copied its pieced collar and lack of the upper facing around the shoulders. The fleece is actually a bit thinner and more drapey than I had expected (or perhaps with the whole garment hanging off the shoulders and neck they could do with some reinforcement), so I probably should have included the upper facing, but, like the collar, cut it in pieces.

Somehow the photos have not yet been taken, which isn't at all helpful. A fashion show is long overdue!

Had previously made nobby nobheads for j and J. My one was a bit tight, although lovely and warm and so I ended up giving it to my pea-headed sister in law. However, thanks to said sister in law, we had developed a beanie pattern. Last winter I made a version for me out of wind pro (not blogged, oops!) and it has done very well for walking, cycling, running and also every day wear.

James complained much about his nobby because, although partially windproof the lower cuff is power stretch and lets the wind through, so it is not great for cycling and even blows off when the wind gets in under the top part! J and I have rather similarly sized heads so since my beanie is plenty big enough for me, I used the same pattern for J. He cycles at the front of the tandem in the wind, so I made the centre piece and bottom cuff with the tougher Powershield remnants. The sides are windpro fleece. The inside of the cuff is a powerdry-like fabric that I bought a length of at the closing down sale of a local walking shop in Ingleton (maybe that haul of cut price bargains should be another blog post!). 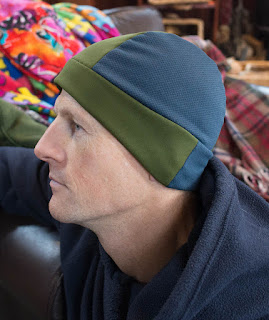 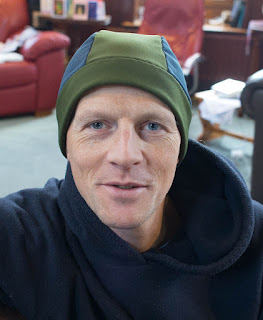 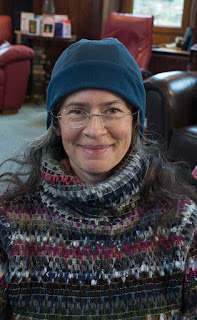 After a fun shopping visit to Harrogate in November (where I found one fabric store, one craft store and a sewing machine store all one one street, as well as a cornucopia of other exciting non-stitching related shops) I looked up to see what was on at the HIC, and discovered the Knitting & Stitching Show was just a couple of weeks away!

The show was amazing, and huge and I bought quite a lot of fabric. As should be clear from the name, the show wasn't all about fabric, but there was quite a range - mostly it was not the super expensive fabrics, and quite a few seemed to have special deals for the show. I met James for lunch in town and offloaded some bags on to him and then went back in for more.  The only downside was that I seemingly caught a nasty cold off the crowds, and seem to have been not quite 100% ever since, which hasn't been at all good for the training plan! Then again it has been raining almost continuously so not much has been missed in the way of outdoor adventures.

I should have photographed more of the shops to recall their names, but I did take a few snaps.

At Higgs&Higgs (Gloucester, but looks to have an online store) I bought 2m of Missoni knit for 40UKP. That was the most expensive purchase of the day, but was not a mistake as it has already been made up into a lovely sweater. What would have been a mistake would be trusting the sales person who thought that 1.5m would be enough!

The Shuttle is amazingly local (but no website) being in Shipley, and I think it was there that I made 2 purchases. One was a quite lightweight slippery knit in a wonderful pattern. Not sure it is often warm enough here to wear this weight as an outer-layer, so it might have been a somewhat foolish purchase, especially as  I still have a lot of lightweight clothes leftover from living in steamy Japan. I think I also bought there 5m of jigsaw print fleece. This has been sewn up into a dressing gown for James.

I am not sure what I bought at Simply Fabrics of London, but was moved enough to take a photo, so must have been something...

Let's see if I can remember all the other purchases.

There was a London based store selling quite low quality fabrics for almost nothing. I bought a length of some kind of fuzzy polyester, but totally missed a trick as most of their stuff would have been great for making muslins of one kind or another.

Another store sold end of rolls and didn't know quite what they were selling, but did the salesman was doing his best to inform people before they bought by enthusiastic application of the burn test. I got into conversation with him, and ended up with what he thought was moleskin, but it was so much cheaper than moleskin I have found online that I have some doubts...

Somewhere towards the end of the day I bought some synthetic red velvet. I am not sure why this was a good idea at the time. I think it might just have been brightly coloured yet cheap. Also towards the end of the day I found some nice, but very dark, brushed cotton for making pajamas with. It was quite expensive and a bit narrow so I was a bit tentative over the quantity and I'm not sure if I got enough for full pajamas for James. Might have to be just a top, or bottom, or for me! I also found some stretch cotton in dark maroon that should work for another pair of trousers for me in my making-trousers-that-fit odyssey.