I inherited my sister in law's crochet sticks and some yarn. I bought the Kindle version of Edward's Menagerie. First there was a little rabbit, and then a rather cute zebra (which went to MIL for Christmas). Then I discovered a kind of magic - if the yarn is thicker the creature becomes MUCH bigger even though the number of stitches is the same. This resulted in Albert the slightly sad Orangutan. 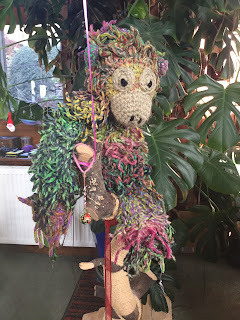 Then a commission! BREXIT the unicorn! Used the zebra pattern, the thick rainbow wool, and added a bespoke horn. I had to have 2 goes at the horn as I was making it up as I went along. Also made the ears a little narrower than the zebra pattern dictated. 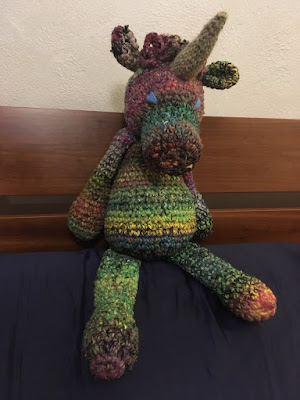 In between and somewhat desperately, as I had no other idea of what to get him for Christmas, I also made a chess set for Uncle John in Law using this pattern (although I added a row to the King and Queen as they were otherwise a bit short). 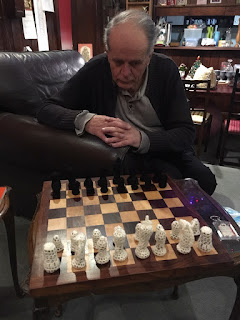 So I thought that was probably double-knotting all done (well, the chess set did have a bit more variety) and I could move on to some other stitch, or design. I even bought some patterns. Imagine therefore how gutted I feel to this morning discover that all this time I have neglected to make the elephant in the room!