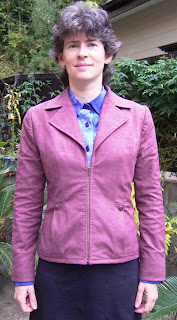 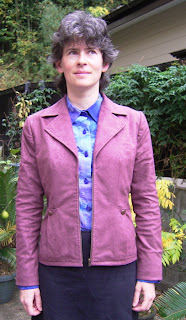 Although hardly a quick job, this jacket did not take quite as long to make as it seems from the length of time since I last posted. We had a holiday in Colorado and Utah, and I finished the jacket shortly after my return. Then it took a while to do the photo-shoot.

The jacket is made from some sort of synthetic suede, bought for not very much from Swany in Kamakura. The edges do not fray. It was possible to un-pick and re-stitch a row of stitching, but perhaps only once before the fabric starts to ruin. 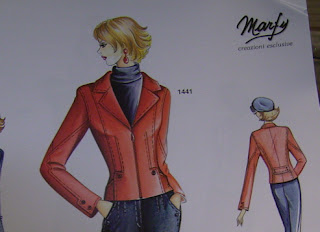 After lengthy consideration of the pattern sizes I bought size 42. In theory this size should be a little tight at the bust and a little loose at the hips. I made a muslin from a very cheap cotton woven. I ended up lengthening the jacket by 3cm, decreasing the shoulders by 1cm each side, and taking in the waist at the back side seam, by about 1cm each side. This last adjustment also meant adjusting the un-belt feature on the back. The final result on the real-fabric is fine but is a little snug at the bust and a little looser at the hips! I realise what I did wrong wit the muslin - I only attached one arm so did not properly check the fit at the bust/across the the back. 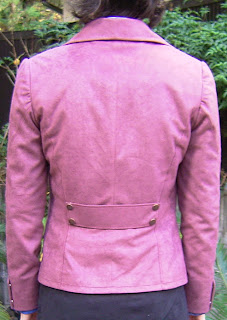 No instructions with Marfy patterns, so the muslin was very useful for practising how to make the jacket. For the basic construction I used Kenneth King's foolproof CD for a Tailored Jacket and this time (unlike last time) I interfaced the jacket body with some sort of hair cloth (I never really know what I am buying in Japan!) from Yuzawaya in Kamata. One super thing about this CD in combination with a Marfy jacket, which comes with no lining pieces is that Kenneth's techniques fit together best if you draft your own lining from his finely detailed instructions. 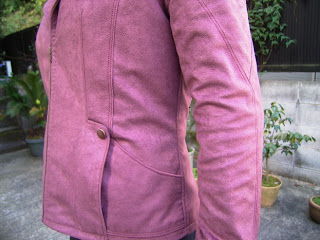 This jacket has quite a few features which deviate from a classic jacket. There is an extra front piece, of rather an interesting shape. Then there is a pocket and a kind of flap thingie. I think the people at Marfy are just having fun making a puzzle! I also puzzled a bit over the cuff and I am not sure I did that quite right since my method was rather fiddly, and I think resulted in a slightly weak point. The front of the jacket is done up with a centred zipper. Because I was using fake suede, which does not press very well, I faced and understitched the hem and cuffs. I also interfaced these facings with tricot fusible. I used various bits of interfacing elsewhere, fusing a woven onto the front at the "flap-bit", reinforcing the back with tricot fusible where the snaps attach (I used snaps throughout - I thought snaps and zippers might go together) and I also interfaced the pockets with a bit of quilting cotton (I don't quilt - I make trews for my James!). I also lapped most of the seams, for reasons of suede. 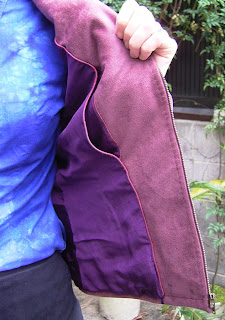 The lining was bought from Yuzawaya in Kamata and is a thicker than usual purple cupro. Kenneth's CD has a really nice lining method with piping and a magnificent inside pocket. The piping on the lining is made from silk duppioni.

I used 60 weight thread and a size 12 microtex needle for non top-stitched seams. For the top-stitching (of which I did lots) I changed the top thread to a 30 weight thread and used a size 16 topstitch needle. I had trouble with the top-stitching at the hem - it might need redone but I left it to see if it holds. However, after that debacle I hand-stitched all the way round the fronts and collars. That did take quite a few evenings - I can only do so much before getting sloppy and this really had to be as neat as I could do (which isn't really very neat).

I like the final result although people do keep asking me if I made it so it must look home-made or weird in some way. tee hee! The Japanese are very kind. Not like those Americans. When we were in Boulder on holiday some incredibly tatty fellow came up and told James he was wearing the ugliest pair of pants he'd ever seen. These lovely autumnal beauties were the culprit.