trews and tops for jules

Sew 3243 ( Misses Pants, Shorts & Top).
I made View B in the trews and then View A in the top. The trews were much more successful than the top, which is like a pillowcase with holes in unless you do some major alterations.

The trousers were a pleasent no-brainer to put together. I used some cotton print which is probably used for making quilts or something. Anyway the shop in Tokyo had about 50 different colours of this stuff so I chose two contrasting colours. I used the all in one stitch and finish stitch on my sewing machine which made for very quick work.

I cut XS, knowing that I was not after such a super-baggy fit as the pattern seemed to want. See review for the other details of the fit. In order to make these full length the need another inch or so adding since at present they have no hem. I have not quite decided what I think of these trousers. It is still too cold to wear them outdoors here. I might try another pair in some of the silk. 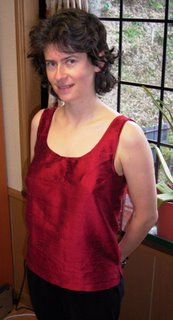 Now for the top. It is pretty rubbish since it is a loose fitting rectangle made in a woven. What I learned from this little project is that this sort of thing would be better either with some sort of fastener that allows a more fitted style, or in a knit with some stretch. So this is why all my vest tops are knits...doh!

In order to make it wearable I added a humungous dart up the back and also small darts at the bust.

Well I guess it was fun playing with dupioni silk. The neckline was a bit tricky to keep it flat, but seemed to work OK with plenty of steaming! 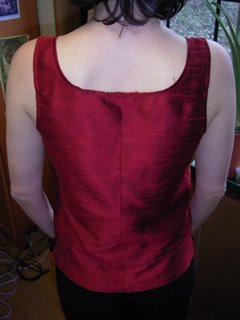 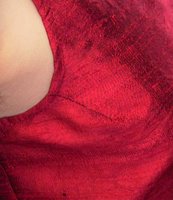 I combined the fleece top and the hooded sweatshirt patterns and then added some cyclists design features in order to make this muslin for the Pertex top, using Polartec 200 WindPro fleece.

I used the sweatshirt as the base pattern and made the following changes:-

1. Interpolated the collar into the KS2439 collar. Added front zipper as in KS2439. I used a chunkier zipper this time. This required altering the angle of the raglan seams so as to take out some fabric at the shoulders.

2. Added an inch across the back at the chest, tapering to nothing at the bottom. The reason is because the cycling position is a leaning forward position, requiring extra wearing ease across the back. I also kept the arms good and long since the arms are also stretched out when cycling.

3. The Buffalo windshirt has opening side zippers. We wanted the side zipper but without the full opening, so I inserted exposed zippers (30cm zippers of the less chunky variety) in the side seams, adjusting the tecnique from KS2439 to work in seams. I wanted exposed zippers because I think this is best to avoid fabric being caught in the zipper during sports use. 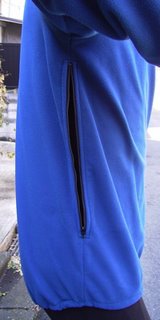 4. Went to 5/8" seam allowances, to make handling both the fleece and Pertex (later on) easier.

5. Lengthened the back in cyclists style.

6. Cord elastic in both the cuffs and round the bottom.


Now all I have to do is make the thing in Pertex.

review
Posted by jules at 6:31 pm No comments:

Pertex Cycling Jacket ... not yet!

The idea is to make a Pertex cycling top for James. His present Buffalo top is ripped from multiple crashes on the tandem. It also doesn't fit properly. Short in the body and arms and too fat round the chest. The collar is also rather useless. The Buffalo top has velcro straps at cuffs and hips(ish) and also side zips.

I think raglan sleeves are the way to go, so I am going to use the Kwik Sew hooded sweatshirt pattern for that. But also I need a half-zipped front plus collar rather than a hood. So I intend to combine in Kwik Sew 2439. I intend to put in pit zips rather than zips down the whole side. Not yet sure what to do about the cuffs. 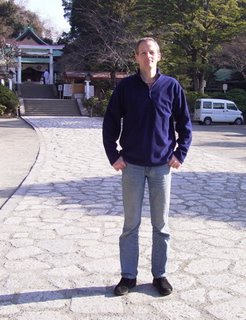 Problems with this top - KS's 1/4" seam allowances don't work with thick fleece because the presser foot pushes the fabric out sideways, leading to uneven seams. Make 5/8" next time.

Sizing is rubbish, but OK for James since he is a giant. This is a loose fitting top, but noone sane wears things that loose. In order to get a good fit cut M shoulders, S+1inch chest, S arms (plus 3" - although +2" would have been better). S width at the bottom edge. Body length M with no extra added. Using standard sizing guidelines this top will drown anyone under 6', and the S size is certainly not small enough for anyone slighter than average build!


The zipper fit style appears to be a perfect replica for the Pertex top so I am happy to have this to practice on. The collar also appears to be just right, but not sure how it will behave in stretch-less Pertex.

Next I have to work out how much (if any) extra ease and length to add to my basic starting patterns to allow for no stretch in the Pertex and the stretched out cycling position.
Posted by jules at 9:02 pm 2 comments:

This is a learning project. I am using some not very expensive fabric, and making a lot of mistakes along the way, and then attempting to learn from my mistakes. Since the fabric gets holes in when stitched, I have been mostly leaving the mistakes and then moving on to the next bit of the garment to do it better. There are so many steps to this project, that you get lots of goes at doing things right. Here's a list of the adventures.

Fabric:
Cotton gabardine with some sort of water repellency built in. I tried to pre-wash it, but it wouldn't get wet! Amazing! Doesn't seem to shrink when steam ironed. It is deep red.

Lining:
Some sort of slippery lining material in dark blue, which turned out to be rather narrow so I didn't have enough for the last two bits of the arms. I am substituting those with Pertex. The construction with the Pertex didn't seem to be a problem, except that Pertex really does get holes in so I used technical-tape (I expect it has a name, but it is Japanese) and steamed the seams together prior to sticthing. The Pertex is noisy compared to the rest of the lining!

Construction:
Sizing - Cut size 14 shoulders, arms and bust and tapered the edges of the pattern pieces down to a 12 above the waist (at the "petite fold line"). Size 12 below that. People have described this coat as tight fitting but it seems fine and I can easily fit a jumper underneath. It is certainly nothing like as close fitting as most of the trench coats worn by the trendy girls in Japan. The way I did the alteration seemed to mess up the button positioning somewhat - probably a higher degree of accuracy cutting out was required too! Still, it works as long as I only button right over left, which is all one would ever do anyway I think. The pattern instructions on the button positions and which sizes of buttons to use where are clearly wrong. I just did it so it looked right and so that button sizes matched buttonhole sizes as much as possible.

Others have complained that the sleeve in this pattern needs too much easing. I used Gigi's method of stretching a bit of material cut on the bias along the stitching line, and it worked perfectly - not that I know really since this is my first go at sleeve easing, but it looks fine to me. The easing of the lining also worked fine using Gigi's other method, of sticking a finger behind the presser foot to stop the fabric feeding through so fast.

The sleeves remain a bit of a mystery. The 3 (12,14,16) sizes on the pattern all have the same length of sleeve. I measured up and decided they were far too long for me, using the carrier markers as a guide to where the wrist should fall. So I cut the petite length (shortening in 2 places above the carriers). The sleeve lining is marked as being cut much shorter than the sleeve. I now conclude that the sleeves are supposed to have a huge hem, and the lining attaches to the top of that hem. I ended up with quite a small hem and so my lining and sleeve don't meet. I wouldn't have had this problem had I not cut the extra length off the lining, but I still think that had I cut the full length sleeve and used a large hem that the carriers would be two inches too low! Perhaps the pattern indicate the size of the hem, but I didn't notice if so.

Interfacing:
I have two sorts of interfacing, both fusible - a heavy one and a light one. In this garment I have played with putting different weights in different places to see the effect. I put light interfacing on the front facing and upper collar and heavy on the collar band, lower collar, pocket welts and the shield. The shield ought to have a lighter interfacing but he rest seem about right, so far. The other problem is that the interfacing doesn't fuse for long to this fabric, so I should have stitched it in more carefully, rather than cutting the seam allowance completely off the interfacing! Hopefully since this coat wont be laundered perhaps nothing too terrible will happen and the top and edge stitching should have stitched most of it down.

Topstitching/Edgestitching
My topstitching on this garment varies from really rubbish to OKish, as I have slowly learned more about how to tackle it. In this fabric you can't redo a line of stitching more than once since you get holes in the fabric. I found a size 20 thread, which is too thick even with a size 16 needle. Sometimes it stitched OK and sometimes not. I found that testing on a scrap of material after each needle re-threading, and then re-adjusting the threading again if it looks bad, avoids bad top sticthing on the actual garment. (doh!) Another thing I discovered was that curves like the collar corners are much neater, and quicker (when you take into account ripping!) to topstitch by hand. I just leave a long thread out of the line of stitching from the machine and then finish the corner with that. The pattern calls for topstitching and edge stitching all over the place. Without a double needle, my lines aren't parallel. One day I was in the train eye-ing up the girls in trench coats - they must think I am a mad lesbian - and I noticed that their coats don't have the double line - they are only topstitched. After that I gave up on the edgestitching, and everything look so much neater - pity I was so close to the end of the topstitching part before realising this!

Review
Posted by jules at 3:39 pm No comments: