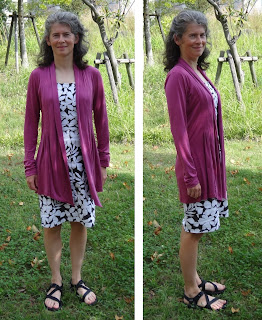 Not quite my usual sort of thing this...


On a rainy day in autumn it gets a little cool at work in the afternoons. I thought an unconstraining flowing kind of garment might be nice to throw on at these times. I chose Jalie 2919, but then had much trouble getting my sticky little hands on the pattern. The shipping is too expensive at patternreview and (IIRC) it was out of stock at Jalie, so I purchased it at sewing patterns.com, a store I have used successfully in the past. The postage was certainly cheap, but several weeks later it still hadn't arrived! I complained and they said they'd send it again. Eventually, about 3 weeks later I got an email saying it had just been shipped and it duly arrived in Japan within the normal 2 weeks that airmail from the US takes. I'm guessing it was actually also out of stock at sewing patterns.com...


The fabric is a 2 way stretch lightweight hot pink silk knit that I impulse bought online from the USA. Such impulse purchases are not as uncommon as you might hope. When I am making a sensible fabric purchase online for a planned project, the postage is so expensive for a single purchase that I typically add in a few extra things to make it feel like less of a rip off. Thus my pile of fabric continues to grow, sometimes with rather curious pieces. I could see from the pattern that it wasn't going to fit my shape with the bulging hips and one-piece back, but I thought it possible that the drape of the fabric or tightness of the design might counteract these potential issues, and thus did not adjust the pattern. When it was made up I did decide it would benefit from refining closer to my shape. Since the design had a pleated front but no design features on the back or side, rather than just take in the seams, I sewed the new seam lines just down to the waist so that they appear to be pleats giving a vaguely similar design to the front. I did this for the back, and both sides. I don't have a photo which clearly shows these features - the wind blew too hard when James took the photo of the back of the garment.


As you can see the arms are quite long. I thought that was no bad thing for the intended use, but I still shortened the arms by 2cm with respect to the pattern. How much one may need to do this will depend on the stretch and drape of the fabric.

I am not sure that my legs are long or straight enough to pull this design off, but I do like the colour, and since I will mostly wear it sitting at my desk and generally skulking around work in the afternoons perhaps the leg issue won't matter too much. How will it look with my pinky Marfy trews?

Now, what to wear for the very cold winter days at work? During that season some people basically wear rugs while at their desks.