All fur coat and no knickers

I am taking an online class over at patternreview. This one is about sewing with faux fur. I'm not at all sure about making a fur coat, but you never know... and many nice coats seem to have fur trim, so I thought it would be useful to learn how to handle it fearlessly. Anyway, here is the result of my class project. Most of the other class members are sewing jackets, so I looked through my Marfy catalogues for a suitable pattern, and then drafted in in doll-size, which is very easy as dolls are much more simply shaped than people. 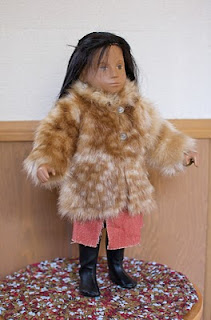 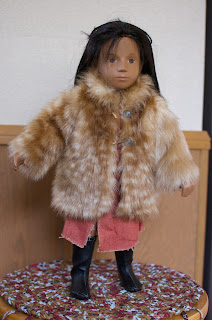 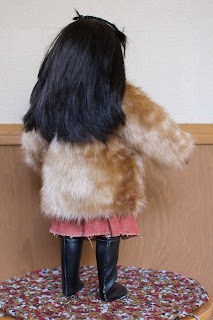 One apparently important aspect of sewing real and fake fur is staying the seams with something called "cold tape". This is special cos it is sticky fabric tape. Since you don't iron fur you can't use any sort of iron-on tape. Amusingly this tape seems to only be available from one shop in whole world, which just happens to be in New York, and you even have to telephone in order to get some surly guy to agree to post you some. So this seems to have slowed most of the class right down. Don't see why they didn't include this in a class kit (some of the other classes do include kits). Anyway, since James' parents visit very soon, I didn't want to wait, and anyway, Yamka (the doll) doesn't demand perfection, so I used fabric medical tape to stay the seams. Problem is that it gums up the needle. Apart from that I basically followed the class instructions... careful cutting out, zigzag seams, bias strips on the cuffs, trimming the fur on some of the seams, clever slit pockets, pick-stitching...etc.... I can't republish all the details here - you'll have to take the class to find out more.

From the dolls clothes point of view, the interesting part is scaling. In the fabric shop (Odakaya in Shinjuku - which has a large fur selection) I didn't know what to buy so plumped for mid-length, mid-thickness, mid-price . But really, for Yamka, I should have chosen a shorter length fur. To cut the bulk down a bit I did not use a facing on the coat, but just lined to the edge. The undercollar is also made from the lining fabric.
Posted by jules at 1:22 pm No comments:

When we came to Japan, we brought with us some Ikea flat pack furniture. It wasn't that we realised that you cannot easily find adult-sized furniture in Japan, but rather that, as we were shipping a crate with our bicycles in, we thought we may as well throw in some versatile solutions for modern living. This included 2 little stools, which we have used as dining chairs ever since. Some years later Ikea came to Japan, and in need of a new sofa, we finally visited recently. We bought a third stool.

And then I had an idea of using up fabric scraps.

I started with what is perhaps an Amish knot rug, using a large eyed leather needle I happened to have. It was made from a piece of fabric I bought with good intentions but then washed with something unfortunate, which turned the white bits of the pattern an unpleasant pale blue. Gosh was it slow and boring work. Took a week or so. Used 1 inch strips folded neatly using a bias-tape maker. 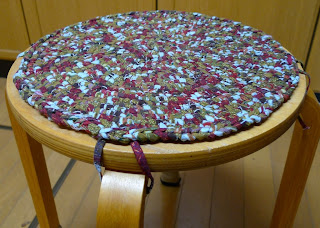 Then, after a visit to Okadaya in Shinjuku, I became the happy owner of a double-ended crochet hook, as well as a more suitable needle. It didn't take long to remember how to crochet - I used to enjoy it and did quite a lot of it when I was 10 years old...so much quicker than knitting. As it turns out, also much much faster than Amish knotting. This one, a spiral, took about a day. Used 1.25cm wide un-ironed strips from an old sheet. 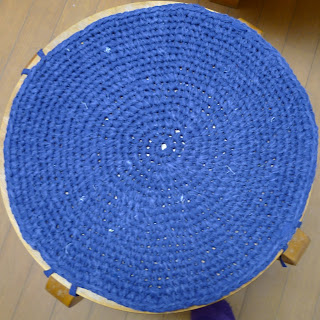 Then I looked on the internets about how to crochet in rounds kind of properly, and made a third bum mat. This time used double 1.25cm thick strips (single 1 inch strips wouldn't work on the hook properly). This one was a little quicker even than the second one, I think.

James helped tremendously by ripping and de-threading the fabric strips. Every few strips I steam ironed and flattened the mat quite hard.

But - I still have loads of fabric scraps left - and to be quite honest, this was very very boring compared to the exciting variety and challenge of clothing construction. Nevertheless the result seems quite nice, and it is good to have a bit of padding on our versatile solutions tor modern living.
Posted by jules at 8:53 pm No comments:

James' second pair of shop bought fuzzy legs, finally became so worn out that they offered insufficient warmth. So it was time to make him another pair. This time I managed to get a photo of him wearing the finished article.

I had sufficient fabric and elastic stashed, and the pattern and construction technique was identical to last time. The only real difference was that since the first pairs were sewn I have a much improved sewing machine, which made simple work of sewing the super soft and stretchy powerstretch fabric (using the straight stretch stitch). Including cutting out, I made these one Sunday to be worn to cycle to work next day, and almost every day since. It seems we are having a cold late winter here - as I type this it is snowing outside, so it seems like tomorrow will be another day for the fuxxie legs.

The final result was just a touch on the tight side, but they do give in wear. In fact James reports that even now, about a month after they were constructed, they have already relaxed a bit to fit well.