First he wanted a button fly. Copied it from some Levi 501s. Then he wanted back pockets with lids on so that his bulging wallet stays safe. So I did those too. Then (admittedly, after he realised the fabric was stretchy) he wanted them tight, like in his youth. So - I think I'll just call them trend setting. :-) 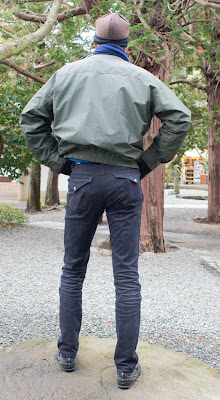 As I recall, the fabric is from Gorgeous Things. Unlike all the other black denim I have seen for sale, this, like the black denim used in RTW jeans, is actually black right they way through the fabric (the reverse and right sides are both black). It is quite soft feeling, and I think it has a slight nap, so I cut it so that it is smoothest when you slide your hand down a thigh. For the tightness part, I tacked them together and adjusted. Took in the back crotch seam about 0.5cm, and the side and inseams both about 1.5cm. The base pattern is the same as this one. James says the jeans are very comfortable. I guess the stretch is making them easier to wear.
I'd always bought the hardware for jeans locally (Kamkaura or Yokohama), but the range is very limited, and this time I wanted smaller buttons for the fly. We found them on Ebay, and subsequently I've also bought some rivets from Ebay. They are the same make as those found here (Prym), but I could get both silver and copper coloured. These only just arrived so haven't yet been installed - but will be soon - probably silver ones this time. James does that part, as he is the one who is more trustworthy with a hammer in is hand.
Posted by jules at 4:59 pm No comments: