The instructions seemed straight forward but I did not follow them exactly. The top is really a test ground for things I learned (am still learning) from participating in Sarah Veblen's recent Understanding Sheer Fabrics Course on PR.

The pattern was very easy with not many seams. For a sheer, unlined top, I think lots of seams have the potential to spoil the flow of the garment.

The fabric is silk chiffon, purchased in Tokyo. Black with white man flowers - and expensive!

I bought this to make View A for me in a size 12-14, but then realised that View C would work for the, erm what shall we call it - home summer shirt - for James. So I bumped up the size to 18, added 4 inches to the length plus an extra one to the back. I also added nearly 2 inches to the arms. View C of this top is straight up and down so no womanly curves to remove from the pattern. [Next time could taper from the under arms by about an inch to the bottom of the shirt - this version is maybe a bit too baggy below the waist.]

I tried various sorts of seams. For bias binding I used some lovely deep red slightly sparkly looking Bemberg lining, which looks lovely either over or under the chiffon.

The neckline I did according to the instructions, but everything else was done differently, using some of the hundreds of sheer fabric techniques explained by Sarah in the class.

I didn't like the silk pattern of the fabric folded over on itself so I bound the shoulder seams with some bias strips. What I learnt there was that you have to be careful that the fabric is kept at the right tension while feeding it into the sewing machine. Because I didn't take care to stretch the chiffon a bit, these seams did become a bit tight. But I made up for this by stretching the sleeve edges like crazy (I was just playing about) and got rather an interesting effect. I'm calling it a feature.

Anyway, I decided that the fabric show-through was much less obvious for underarm and side seams, so for them I did a simple 4 step zigzag to stop the edges fraying.

Then we get to the bottom of the garment! The slits look quite nice with a binding. It was my husband who pointed out that I had to use a single piece of farbic to bind the slit to prevent it ripping at the top.

For the bottom hem I was faced with the same potential problem of fabric showing through. What I did was cut a bit of the bias lining fabric, stitch it on like a facing (right sides together) and then it becomes the filling in the fabric sandwich of the hem. I then slip stitched the hem, but I am thinking I might machine stitch across to increase the stability because I am wondering if this hem does rather highlight an error I made in the pattern adjustments. I should have cut the inch longer at the back but tapered the edges to the same length as the front. Instead I cut it an inch longer all the way across. When I first stitched the hem there was a large hill shape in the back hem, which looked three times as bad because the back piece and front piece were a different length at the side. The funny shape required is because of husband's large shoulder blades which pull up on either side of teh centre back. I realised this was my design error and I did improve it a bit when stitching the binding on the slits - I stretched the binding when stitching the back part and stretched the chiffon when stitching the front. As the picture above shows, the edges do now meet. Went for lunch at the local excellent Indian restaurant and the waitress had exactly the same problem at the back of her silky top, so now I don't feel so bad about it!

[Update: I folded the bottom hem in half again and then machine stitched. The extra thickness/stability does seem to have improved how it hangs, although of course the curve on the back hem remains.]

The main conclusion is, if you are a sheer fabric novice like me, choose a really really simple pattern like this one, or you might never finish the thing. This took me about 2.5 days solid fun!

Oh yes one other point. You may be wondering what possessed me to make a silk chiffon man-blouse for my husband. The reason is that he is a Scot living in a country with 35C 100% humidity summers. He refuses to wear anything on his top half while indoors at home. But this top is light enough that he will wear it (so far!) and I much much much prefer these elegant man-flowers to the sweaty alternative! Futhermore, inhabitants of England, currently being scorched by 37C temperatures, may like to take note that it really is OK to take off your woolley jumpers when it gets hot.

review
Posted by jules at 1:12 pm No comments: 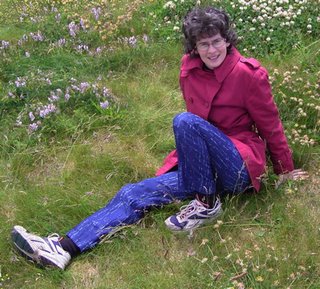 I think I am not as advanced as many who have sewn this pattern. I picked View C because it was the simplest design so I could concentrate on making it fit. On the other hand, getting a below waist pair of trousers without belt loops to fit and not fall down seems to me to be no mean feat. I took quite a long time trying to get a reasonable fit. I wish Vogue patterns had more sizes on them! After all my trial and error I think I need a 10 front and 12 back but I have a 12-16 pattern.

I think the back fit is quite a bit better than the front fit!

...but maybe it is the fault of my knees which like to bend the wrong way, thus making trousers look crumpled at the front belowe the knees and tighter at the back. I've seen adjustments for "sway back" mentioned but that seems to be something to do with waists and hips rather than knees...?

I used distressed(?) lightweight stretch denim. It is full of little rips in the crosswise threads that give it the kind of stripey appearance.

I compared and constrasted the pattern with a pair of OKish fitting (but they do need a belt) quite tight slightly stretchy below waist RTW trousers that I own, and decided that a 12 should be OK, although it might require taking in a bit the sides. Possibly I failed to account for the additional stretch in this fabric compared to the RTW, which could have made the trousers come out a bit bigger than anticipated.

After cutting them out, stitching crotch and inside leg seams I basted the sides together and playing about for ages I suddenly realised that what I needed to do was take in the sides of the fronts but not of the backs. I tapered to the normal seam allowance at the hips and then tapered in again below that, but this time the extra half inch or so was taken off both front and back evenly.

The waist band was a weird fit on me. It seemed about the right size at its lower edge but a couple of inches too large at the top edge. I ended up taking in the excess at the back seam and also at the sides by cutting side seams in the waist band.

The fly looked dangerous to me, since it seemed to leave the zipper almost exposed (and probably definitely exposed with my dodgy stitching). Therefore I did the fly from KS 2820, by cutting fly extensions on the front piece. I am not totally sure that after doing the waist band as drafted on the pattern is still the right length, but it seemed to fit OK. Next time I will re-draft the waist band anyway, given the fit problems outlined above.

I took an inch off the pattern length but then took another inch off when sewing the hem.

I had thought the crotch was going to be fine after comparison with my RTW trousers. The front crotch is actually too short on the RTW trousers, leading to the front falling noticibly more below the waist than the back. The pattern was somewhat longer so I thought it would be an improvement. I think it is better but actually it is too long so I probably should have taken about half and inch off the length of the front crotch. I didn't do this partly because I had already sewn the seams around the crotch and also because I think it might be better to start with a size 10 shape of front crotch, which seemed to me to be an alteration that I couldn't make after having cut out a size 12. The other reason I didn't do it was because I already had a better fit than my RTW trousers so decided to stop there.

James thinks the trousers are still a bit loose, but I didn't want to err on the side of too tight and anyway, for summer it feels quite comfortable to have a slightly looser pair of trousers.

I think I will sew it again to try and improve the fit. Perhaps sewing belt loops onto view C would be a good precaution.

These trousers do seem like a very nice pattern, and they do already fit better than RTW, however the impression I have is that making trousers that fit is difficult!

Note: Estimated changes for next time, on top of those made for this version, assuming same stretch /weight fabric... take 0.5 inch off each side seam, and 0.5 off front crotch and also off front inside leg. Redraft waistband - make narrower towards waist and also make sure the length is consistent with the altered fly construction! Maybe take extra 0.5 inch off leg length.
Posted by jules at 8:39 pm 2 comments: