I bought this lovely fabric in Keitoya in Kamakura. It is a 4-way stretch cotton woven, with a lot of stretch along the grain and less stretch across the grain, relatively supple considering its weight, quite warm and very comfortable. However, when I got it out of the fabric pile, James kept pulling faces and covering his eyes, and I had to teach him what stitchin' people in the interwebworld say when they dig unspeakable fabric from their stash, and that is "what was I thinking?". This enables one to pass off fabric one thinks is lovely off as a blunder when one discovers that the rest of the world disagrees. I'd thought a pair of trousers in this fabric were just the ticket for work or play. After all, it seems nothing clothing-wise is a step too far in Japan.
This is Marfy Pattern #1058. It was in the Fall 2007/2008 issue but as evidenced by the Marfy patterns on the Vogue patterns website, it is not new. The pattern appears in the catalogue twice. The first entry they are pictures with a loose shirt/tunic and called "tapered hip-hugging pants", the second time pictured with a quite minimalist jacket they are referred to as, "straight pants with pointed hip-hugging waistline". On the Vogue Patterns site they are in the Marfy Autumn/Winter 2006 collection and pictured in a third ensemble with this text, "These straight, hip-hugging trousers have a wide inserted waistband".

I cut the trousers on the line of less stretch in the fabric which was the cross grain. This means the pattern is sideways, but I decided it was better that way round since it elongated the design. I made the trousers assuming from the Marfy size chart and previous experiences with their patterns that I may have to take them in a bit at the hips. The fabric is very stretchy and I took 2cm at the back seam allowance (just in the top ~10cm) and 1cm each side seam allowance (all the way down). It was then I realised I hadn't sewn the back darts! No trousers I have sewn before have had these so I missed them. The fabric is so stretchy that I was able to take the 1cm darts, which improved the shape, without much trouble, although the waistband is a tad short with all those cm removed. I am not sure I have learned so much about the pattern since my fabric is so forgiving, but these were a much easier fit than the Vogue trousers I have made, where I had to change the shape of the side and crotch seams and waist band.

I only noticed while perusing the vogue patterns site and the Marfy catalogue to write this post that the waistband is secured with two buttons and that there are belt-loops on the catalogue photos. The two buttons would have been a good idea since the waistband is quite wide. As for belt-loops I can add them later if I can find enough fabric - I don't have much left. Since it was rather expensive I did not buy much excess.

A size 11 universal needle worked best - a thicker one made holes. I used Resilon thread a straight stitch and I finished all the edges with an overlock stitch.

Here are some pictures of the, erm, ensemble of black cotton jumper and flowery trews. The camera has difficulties exposing on both items simultaneously, as I expect do most peoples' eyes. I still like these trousers and even James admits they are "fun".

When I was 17 or 18 my Mum bought me a black knit cotton jumper. It is a slightly odd fabric, like it is made of string. It shrinks when washed and then stretches in wear, a bit like denim does, only more so. Anyway, this jumper no longer has much shape, but I kept it because a smartish-casual (ie not sporty) black jumper is a versatile thing. However, when I found a knit in Yuzawaya (Kamata) that had a similar feel I though I should make a replacement. The fabric is a sheer, or perhaps it might be called a holey knit. It is so cold at home and work in winter that we rarely actually remove our jumpers to show what is underneath, so I thought it was a positive feature to be able to see through the fabric. Having worn the jumper for a week I don't think this fabric is as hard wearing as the original so I have doubts it will be around in 20 years.

I took the pattern I used for this jumper, which in turn was stylistically derived from Burda 8291, and added ease (2 inches total = 1/2" at each side seam) at the bust and waist to make a less fitted top. The hips always seems to stick out on the other versions so I did not add any ease there. I then redrafted the sleeve in order to make it a bit looser. A strange thing happened when I did this because I made a mistake and equated the lengths of armscye and sleeve cap not on the stitching line but at the edge of the pattern pieces. This results in the sleeve cap being too short. However, in the original pattern I had released a dart at the armscye, and it was just about the same size as the error induced by my drafting mistake. So I took the opportunity to ease the dart fabric as was taught in Sharon Gifford's T-shirt class on PR . Due to the willingness of the fabric to shrink and stretch under the iron, this worked far better than I expected. Until then I'd not got this to work that well. Now I think the key is in how the fabric reacts to the steam iron.
I used a size 14 needle, put Resilon thread in the bobbin, and used a straight stitch for some of the seams (double back-stitch for the hems). Resilon is a Japanese thread in size 50, that has some stretch and is also rather strong, which makes it possible to use a straight stitch in garments with small to moderate stretch. I sometimes use it in top and bobbin, but it has a tendency to spring off the reel and then twist up, especially at the start of the reel.
Posted by jules at 12:55 pm No comments: 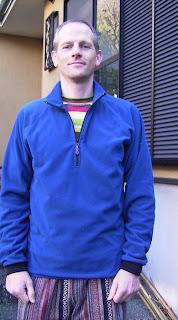 This was originally a practice run for a pertex cycling top, which later became world famous. However it has turned out to be a very popular fleece top for wearing in the mountains. James uses it as apres-walking wear in the drafty huts during summer and walks in it in the winter. I highly recommend windpro fleece; it really does make a far superior jumper for cold conditions. Yesterday James complained that he didn't like the cuffs. He said they were cold. As the pertex practice these were created using a simple hem with elastic cord in them. I have now replaced this by more normal cuffs made from powerstretch.

One lunchtime during the AGU in San Francisco we popped into Sak's 5th Avenue Men's Store, which isn't on 5th Avenue at all, but just of Union Square. How silly to forget to rename their store when they went to SF. The shop is tiny compared to the other bit of the shop (the wimmins section?) which runs for almost the whole length of one side of the square. Anyway, inside S5AMS were lots of lightweight fluffy jumpers costing hundreds and hundreds of dollars. One might have been tempted only a badly fitting jumper is still a badly fitting jumper no matter the fluff-factor or the price tag. So, by way of getting some fun in famous Britex fabrics which is nearby, I suggested to James that we go and buy some fabric and make a fluffy jumper ourselves. Britex is an odd shop. You can't really browse. You tell the staff and they find you what you want from their stock. Fine for us since we'd just been feeling up the fluffy stuff in S5AMS. They sold me 2.25 yards of a 60 inch wide black wool knit for $50 a yard. It really was only just enough with no room for cutting error. It's smarter and less fluffywuffy than the stuff in S5AMS. I think it's high quality, and I expect it to wear well but time will tell.

So then it was back to KS2561, for the third time in the year. We decided to make it a bit slimmer than the previous version made with quite thick (and very fluffy) fabric, so trimmed the pattern down by 0.25" on the side seams, tapering the arms to their original side at the cuffs. Got confused again by the sleeve length. My tracing stated the adjusted pattern had been lengthened by 1.5" compared to the original but when I compared the two, it was much less than that. so I retraced it to 1.5" extra length. Of course when it came to it I had to take that extra length (5/8") off again! I've also now adjusted the cuffs to be narrower than the original pattern piece because I prefer them shorter.

So now having a properly adjusted pattern, James wanted another longsleeve T-shirt. The fabric to be used was this buttermilk. It is quite lightweight and I did wonder if it would be too light for men's t-shirt. I'd not sewn with buttermilk before. It really isn't all that stretchy. Pretty much no stretch along the grain and not that much width-ways. These features conspired to make James complain that the sleeves are now too short!! tsk! The problem is mostly that the tighter neckband (less width-ways stretch) pulls the neck higher, but the lack of length-ways stretch also contributes. So now I have a note on the pattern piece to lengthen it an inch for the crew neck version! A v-neck in this less stretchy fabric would I think really require a longer neckband. Another thing about buttermilk is that it ladders - so I got to use one of the very fancy over-lock stitches on my machine which was quite fun. A good feature of the low-stretch fabric was that I didn't get any stretching of necklines and hems. A less good feature is the fabric seems attracted to other fabric. It doesn't cling to skin but it does to under-Tshirts or over-jumpers, as can be seen in the photos of both the shirt and the jumper in this post.