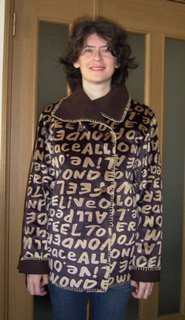 Continuing along the theme of easy shapeless things I bought Kwik Sew 3096, which is a straight jacket. I mean that it doesn't have any shaping. Reviews had said that is was very loose fitting so I cut an extra-small rather than a medium-to-small. Rewiews also described this pattern as dead straight with both hips and bust the same size. I measured carefully and disagree - the hips are an inch wider than the bust in size XS. My hips and bust are actually the same size, so I altered the pattern to make it the same too. I also lengthened the jacket, cutting XL on the bottom. Because of the bonkers fabric I had found I didn't want to make a short wide jacket. It fits delightfully well except that the sleeves are a little short. There are supposed to be 3 inch cuffs, but I wear them at 1-2 inches. I didn't think of that when choosing to cut the XS rather than the S. 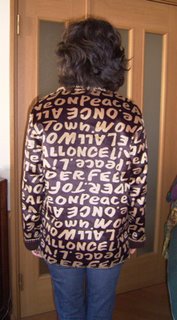 Anyway - the bonkers fabric is something I found in a shop in Kamakura. The Japanese have this bizarre habit of wearing clothing with inappropriate English (sometimes French) phrases written on them , so when I saw the brown and tan fur with 2 inch high stupid words on it I couldn't resist. I really don't know what the fabric is for - some sort of home interior - a cover for a kotatsu perhaps? Its 3 layer, fur on the top, a sort of plastic insulating middle layer and a sort of synthetic mock-suede inside. Anyway, I can't be bothered with fleece jackets for outer wear because they aren't windproof. This jacket sure is windproof and is pretty good for cycling around town in the winter. Even better I blend in well in the high street now. ;-)
As for the stitching, I messed up the buttonholes because I didn't want to stitch the reinforcement patch to the outside (cos of wrecking the words on the fabric) so I put them on the inside. Then realised I couldn't stitch them in so they looked good enough through the fur so ended up just trimming down to the buttonholes. I added two extra buttons to the design so that the jacket actually closes properly. My fabric was heavy so it just didn't hold closed with only the inner button included on the pattern. The other problem I had was that I had to tack everything rather than pin, because the fabric was too distorted by pins (and the pins got bent!). After adjusting the tension on the sewing machine, it handled the fabric fine, even in 4-6 layers. I don't have a serger - the pattern is really meant to be an easy serger project. My machine overlock stitch is nowhere near neat enough to finish the edges so I blanket stitched in gold-silk wool, which I expect will unravel immediately. James thinks it it very fitting to not only be wearing a blanket, but to have blanket stitched it too.
Review