About a year ago, instead of using the used tea leaves to grow mould in the sink trap, I made James dry and save and store them all in tins. It was really the mother-in-law's idea as she had remarked that old tea leaves make good stuffing for pin cushions and the like.
The question was, which stuffed toy should we make. We pondered various options, but suddenly realised that we needed a hippo in order that the one of us being the most hypocritical at the time, could be given the hippo. 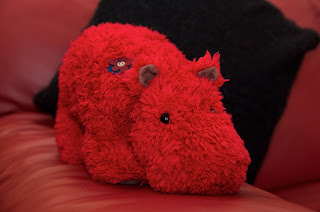 For the first time I made a purchase on a website called Etsy. I bought a pattern called Heather Hippo, by FunkyFriendsFactory. The pattern arrives as a PDF file a few days after the order is placed, and then it can be printed out. Wanting a slightly smaller hippo, I printed out the pattern at 75%. The pattern is very well made and the pieces fit together very well indeed. The instructions were also comprehensive. 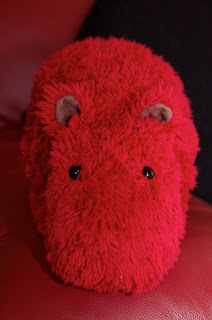 I found enough red fur for about 600¥ in the bits bin at Yuzawaya in Kamata, used fake suede for the contrast and sewed Hippo up my hand. The tea gives her almost a bean-bag feel, and she smells very nice, but I should have made a lining out of a closely woven fabric, as little bits of tea are going to escape through the somewhat loose weave of the slightly stretchy red fur fabric. 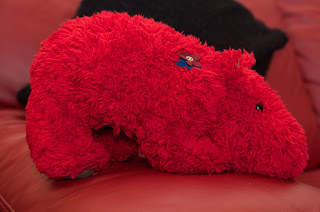 Oh my goodness! That is a gorgeous hippo. Sooo cute. Well done.
Trish