In autumn I lost one of my favourite cold weather cycling gloves. I think I left it on a bus. The pair not only fitted like gloves, but were the best I had for both bicycling, every day, and mountain climbing. What a sad loss... 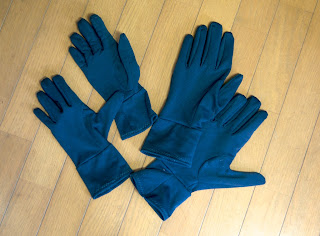 So I bought some kevlar and some Gore-windstopper from Rockywoods, and started to learn how gloves are constructed. I looked at all our pairs of gloves. They are all rather differently constructed. It seems there is no right way to make a pair of gloves. I drew around my hand and also James', and made some mockups and then some wearable mockups out of some leftover lightweight windpro. Now my friends are fascinated that my gloves match my jacket! These gloves are OK for autumn or spring but not warm enough for winter cycling. They also are not good for cycling as they have no padding on the palms.
Somewhere along the way, my lovely idea of a pair of all-round winter gloves for me got transformed into a pair of lobster-claw cycling gloves for James. I'm not sure how... partly because I am soft, but also because I can put a pair of lightweight fleece gloves inside the windpro ones and have a result warm enough for cold days and mountains, and I do also have a pair of winter cycling gloves that are not quite as warm as the one I lost, but could do with being worn out of my closet. 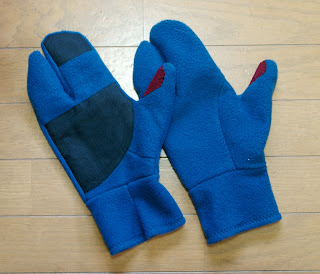 The big leap of understanding in the hiatus between the construction of the windpro gloves and the lobster claws was the realisation that we don't walk around with our fingers straight, but with them curled towards the palm. Thus, flat gloves work their way off the hand in use. The lobster claw pattern has shorter fingers on the palm side, and the gusset between the middle two fingers is also interestingly shaped.

I am told that the results are nice and warm but it turns out that this particular Gore windstopper is not the best for gloves because it has a fleecy outer and a smooth lining. For gloves you want a hard outer and fleecy inner! You'd think I could just turn it round, but the lining has a kind of loopy stitch that would catch on any rough edge. So I've sent off for some more bits from Rockwoods - then perhaps I will be able to start work on my all-round winter gloves...?
Some stitchers measure their progress on their fabric stash in terms of yardage in and yardage out. Be warned that spending a month making gloves is disastrous when seen in these terms!! I have worked through barely a metre, and bought several metres for future projects in the meantime...!
[Note for jules - have adjusted the finger lengths on the gloves pattern, but need to re-design the gussets]
Update:
Found some scraps of blue Polartec Powerdry of just the right size, and lined the gloves. James seems happy, but now, of course the weather has warmed up...

Jules, thanks for the link to your blog and the comment on mine. Sure, you can add a link. Visitors are fine. Carol Sac is now the custodian of the banners so they are getting more exposure than my closet shelf.
Cool gloves. Would they be too bulky made double with thinsulate batting between? Or how about a knit lining?

OK, thanks - I will add a link to your blog post in the email and/or on the overview of the 2011 Conference page on the website.

For the gloves, I considered a thinsulate lining, and it would be a possibility. Do you know a source for thinsulate in Japan? As you suggest, this would be quite bulky, and that's best avoided for cycling, where having some dexterity is quite important.

Your gloves are lovely! How have they worked out for you as far is biking is concerned? My husband who is an avid biker have been wanting a pair of lobster claw gloves. Could I perhaps persuade you to share your pattern for a price? Would love to try my hand at this with my windbloc fabric stash. Cheers!

denimpoo: Lobster claw gloves are great for cycling. Question is, what size are your husband's hands? Measure round the flat hand round the knuckle and also the palm to middle finger length. James has larger than average hands, so you might have to adjust the pattern a lot. If you go to my profile, you can find my not-very-well disguised email address. Please email me to discuss this further...

I found your site looking for a lobster claw pattern and yours look great. Is there a printable pattern somewhere? I have searched your blog and the sewing.patternreview.com site but did not find one.
Thanks for the inspiration

Thanks for the enquiry. I did send a pattern to denimpoo (see comment above), but unfortunately I haven't got time right now to make and send off another copy. Let me know if you are still interested in June! How useful it would be depends on the size of your hands - mine are quite long women's and James' large mens - no other sizes available! ;-)

Could you by chance send me the pattern for your lobster biking gloves?
thanks
rhuyen@gmail.com

Could yo please send me the pattern of your lobster biking gloves?

Could yo please send me the pattern of your lobster biking gloves?

I'm wondering if you have a pattern online or for sale that I could follow? I'm interested in creating a pair for my boyfriend. He recently had his mountain bike stolen, and while I cant afford to replace his bike - I'd like to make something nice to get him interested in riding again during the fall. I tried emailing but it looks like the posted email is outdated.

HI! I LOVE your lobster claw mitts and would love to make a pair of my own. Do you have a pattern for sale?