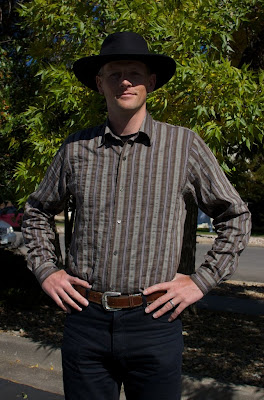 One day, sitting in church gazing at someone in front of me, I realised he was wearing a nice casual style shirt and then realised that such a shirt could go well with the black jeans I recently made for James and that the fabric (from Emma One sock) I had already bought some years ago to make the long-sleeve version of James' evolving shirt pattern could be just the right thing.

It turned out that the required adjustments had, for once, been made to the pattern before it was put away last time, although since last time was a short sleeved shirt I still had to adjust the arms compared to the original version. I ended up leaving the arm width the same but adding some inches to the arm length, and I took the placket pattern and instructions from David Coffin's shirt making book. I also used the book for instructions on how to construct the shirt. I think that the only major problem remaining with the pattern is that the collar is a bit long in circumference, meaning that were the top button to be fastened there is not really enough room, causing the collar to not look right. Luckily, this shirt is unlikely to be worn with that button fastened, but this would need changing for a more formal shirt. The other issue is that the collar pattern requires a 1.5cm seam allowance on the edge that attaches to the collar stand. I only have 0.5cm, which really made things a bit tricky.

Oh yes - I almost forgot my terrible blunder. I cut out the pattern. Then a day or so later I was again gazing - this time at striped shirt a friend of mine was wearing. ...and noticing with dawning horror that the fabric should match at the centre front not the front edge of body pieces. Of course. Obvious. But I had done it wrong. I also did not have sufficient fabric to cut new front pieces (or even one new body piece). That is until James told me that having a seam across the front is really not a big deal if it is tucked into the trousers. He even suggested that he'd had a shirt like this previously! So I cut new fronts each made from 2 pieces and I lined up the striped pattern on the seam as closely as I could. ...and yes, indeed it worked - so well that I almost forgot to write about it...
Posted by jules at 8:02 pm

I love the dawning horror moment. That is what happens with a lot of my garments. Including the new one I whipped up today.

Nice pics. I have striped shirts just like this but no hat or boots, could possibly be buying some soon I think!

I honestly have NO idea where the blunder was - and I can't spot the solution, either, which means, kudos to you. But I can tell you, that's some cool lookin' black-hat-black-tee-black-jeans-snazzy-new-matching-shirt cowboy you've got there. Very Young Ed Harris. My compliments to his fashion consultant. And, Merry Christmas!