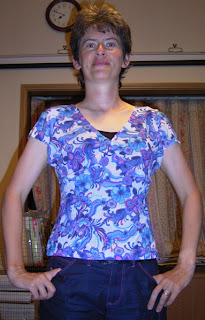 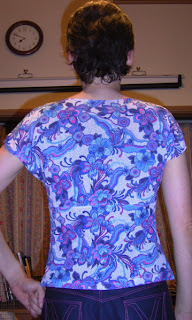 This top is based on Burda 8361. When I compared the pattern pieces to my own t-shirt pattern they were so radically different that I thought this was a chance to have some fun attempting to transfer the pattern details onto my own pattern.

I started by finding the height on the back to chop the t-shirt pattern in half horizonatally. Then I cut the front in half but with a curve like on the Burda pattern. The v of the neckline seemed low (why should become apparent later in this story) so I added a short CF seam to raise it a bit. After that it was just a case of swivelling the bust dart to the horizontal seam and drafting the pseudo-arms, which are just extensions of the shoulder.

The mistake I made was failing to realise that the shoulder to tit distance of the Burda pattern was too long for lil me. As a consequence the bustline was too low. Of course I only realised this after cutting out the fabric and basting the top together to try it on. To compensate I raised the shoulders an inch but of course this means the top is now a bit tight round the ribs and also it meant that I had to do the view with the unstitched arm-shoulder seam, since the arms would now be rather tight stitched up.

The top came out fine really and I have been wearing this quite a bit in the hot summer. Made of "onionskin" knit it is slightly sheer and feels best with a lightweight vest worn underneath. The vest is silk and I think the onionskin is polyester so that might be why it feels so much better with the underlayer.

This pattern used so little fabric (<1m) that I have enough left over to make a repeat. It is for fun since I rather enjoy the pattern-geometry stuff. I've already drafted a hopefully improved pattern so now just need time to stitch it and see if I've made things better or worse.