Hisashiburi - Japanese for "long time no see". We moved from Japan in December last year to the north of England, and into our new house in August this year. Until this week, the sewing machine was been switched on just once to repair a cushion cover. :-( But then sister in law Helen came to visit us in the fast cooling north of England and asked for... hats. The super sewing area was all ready set up, new iron purchased, so all I needed to get going was something to make stitching seem more important than one of the zillion new-house jobs. 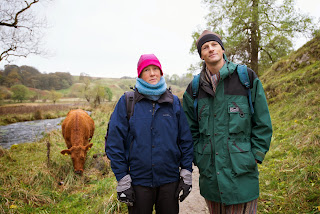 Measuring ear to ear over the top of her head, Helen's head is quite a bit smaller than either mine or James' heads. I had a beanie that I had got for free that was too small for both of us, but fitted Helen, so I based the pattern on that. It is made from Polartec 200 fleece previously used for a jumper and a loud pink and black striped lycra that I bought years ago, but never made into anything as the stripes make too much of a psychedelic effect for a large garment to be a reasonable proposition. The hat is actually reversible but I guess it will be warmest with the fleece worn on the inside and the lycra on the outside. To break up the psychedelics, for the front panel the layers are reversed, and the lycra is reversed on the side panels.

Normal fleece lets air through it very easily, so I should make a more wind proof version, and also some slightly larger versions of these for me and James, who are also quite short of warm hats. Probably I just need it to be slightly longer ear to ear, and James needs a slightly wider circumference too.

New house decorating seems to occupy the same space in my brain as stitching, and there is lots more still to be done, but there is also much stitching to do. I am wondering what to do with all the lightweight or solar resistant clothing in my stash carefully shipped from Japan. Perhaps I'll just have to line everything with fleece! 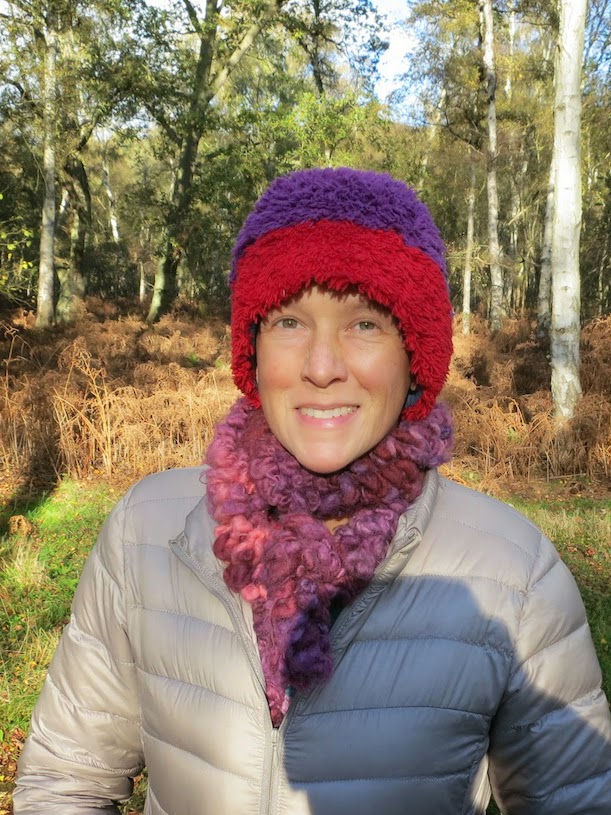 This is the proper winter version. Helen seems to feel the cold, and I hope to defeat her with this hat as it must be far too hot in almost every circumstance. The inside is a non-stretch thick windproof fleece, and the outside is polyester fur stuff, previously used to make this hoody and others of similar ilk. If you wanted one, it's too late now - the purple is all used up! The inside fleece is annoying stuff, as the windproof layer is on the "inside", which makes it useless in a single layered garment.. the whole point of fleece is that it traps the warm air next to your body. However, used as a lining, as in this circumstance, one can reverse the fabric and so it should really work to heat things up. Quite lucky with the sizing. Unlike the first hat, this one is non stretch and Helen was not on-site. I thought the first hat a little tight at the front horizontal seam so I sewed a narrow seam allowance on the rim  pieces and the lowest couple of cm of the vertical seams. It was a bit subjective - I'd gained an idea of how much smaller Helen's head is than mine so worked from how right it felt on me - probably added 1.5cm of width.

I have also made a version for me. It is more like the first hat, and no photo yet. The purpose was to make, an ear warmer for cycling that also had a top to protect from the bitter Yorkshire wind, and that could also go under a helmet. I am not sure it is a success. The fabric is 100 weight wind pro, but really isn't really very wind repelling! From relative measurements of me and Helen, I added a couple of cm of over the head distance to her pattern. I also slightly reshaped the front piece to make it a bit more snug on the forehead. The top is a single layer, and the rim doubled.  I also shaped the hat to fit over the ear lobes, as a cycling hat should do. I wore it mountain biking this week, and it performed quite well, although perhaps it is a little too long at the front. I am not sure if I can be bothered to re do it, however. Probably better to see how the winter develops and make another in a more windproof fabric if required.
Posted by jules at 1:07 am

The blog was absolutely fantastic! Lots of great information and inspiration, both of which we all
need!b Keep ‘em coming… you all do such a great job at such Concepts… can’t tell you how much I, for one appreciate all you do!
wish to get a visit Schedule1 for tax and business solution