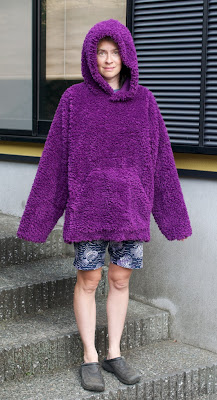 Oh no! It doesn't fit! And it's 28C in the shade. I wore this for about 10 seconds. Not only was I broiling, but photographer James was being eaten alive by mosquitoes (they find him almost as attractive as I do).


But no need to panic really. This isn't for me, but for my friend Rob, who saw my fluffy hoodies on the interweb, and recklessly asked for a purple one. Serendipitously, a couple of weeks after his request we visited a new branch of a fabric store (new to me anyway) - Yuzawaya in Kichijoji (part of Tokyo) - and there were all the colours of the same fabric used for the other fuzzy hoodies. Mind you, there were no dark colours, which I expect Rob would prefer when being less reckless. Well, there was brown, and black but they would be no fun at all. And after finding the purple, there was no going back...

Well now it is done. I went from measurements and am surprised that Rob is just 1 inch thinner than the extra large size in Kwik Sew patterns. I sewed the extra large with no alteration, as the fuzzy fabric takes up some of the ease. I was surprised by this sizing because Kwik Sew are American patterns and I would say that the majority of American adult men are bigger (at least in girth) than Rob is. Aren't fatties allowed to sew their own clothes too?! It seems mean to me.

I am hoping I have erred on the large side with this, and will take my needle and thread with me when I hand-deliver it to Rob later in the year. I sewed the pocket on a little high so that the hem can be turned up if necessary, and of course the same can be done with the arms. The side seam can also be taken in. Just hope it's not too tight!
Posted by jules at 5:44 pm

I don't understand why you are not satisfied with it. It's so beautiful. Though it's a bit larger than needed, it's warm and the color is pretty. You know that I once ordered in www.au.essay-writing-place.com and there was just the same one in the picture. Imagine it was a design paper. I didn't know. then they told me that they write about clothes, not sell clothes:) Oh, that was fun:))