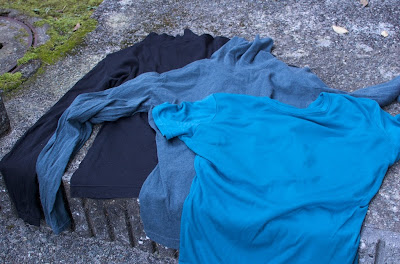 It may not look like much of an extravaganza, but there are more. I made six in total. Hence the long time time my last blog post.
I decided I needed some simple tops to wear as a base layer during the winter months, which are rather cold here in Eastern Japan due to the buildings being poorly heated.

I used my T-shirt pattern, lengthened it a bit and adjusted the armhole slightly as I went along to try and get better fit. I also drafted the long sleeve by lengthening the 3/4 sleeve pattern I already had. I think I have a reasonable pattern now, assuming I can keep track of all the pieces next time I bring it out.

No photos of me wearing these - it is too cold both inside or outside to wear them with nothing over them, but the longsleeves in particular have been getting continuous wear.

So - the extravaganza:
1. 1 black longsleeve with turtle neck. Nice drape, slightly shiny knit.
2. 1 black shortsleeve (same fabric as 1) with jewel neckline (not shown).
3. 1 green longsleeve with roll-neck, in a less shiny and more cuddly fabric.
4. 1 blue longsleeve (same sort of fabric as 3, and similar tone but blue) with roll-neck (not shown - but being worn to write this post!).
5. 1 red t-shirt. I bought a men's L size T-shirt in Yellowstone, boldly cut it up and re-made it in my size. Really this adventure deserves a blog post in itself, but will have to wait until it is warm enough to photograph. Used original neckline. Made in your standard US thick t-shirt cotton knit.
6. 1 green t-shirt with jewel neckline. Heavier weight than 1; quite a stable fabric.

One thing I learned is that how long to make the neck piece depends on the amount of give in the knit, so I found that rather than apply a rule precisely (like 3/4 neckline length for a turtle neck), it was best to cut it a couple of cm extra and then adjust later.