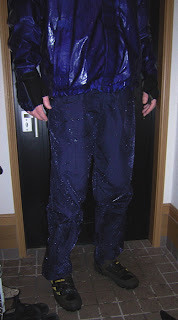 In the beginning there were Pertex overtrousers but, as it turned out, Pertex doesn't really have what it takes to keep out Japanese rain, so, in January I bought some Paclite Goretex from a shop called Rocky Woods. I also got Textile Outfitters to convert my prize into 7m of iron-on seam sealer, only I made the mistake of thinking James' inside leg measurement was his outside leg measurement so there wasn't enough sealer to tape the hems or waistband. 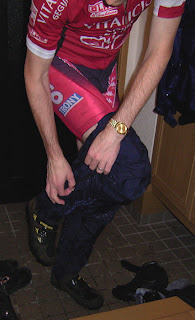 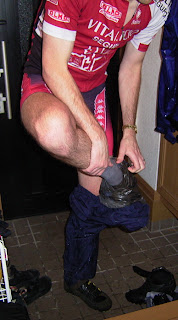 There is something that I have realised that I really like about sewing functional clothing. With normal clothes there is always the worry of "do I look awful in this?", but with functional clothes the question is "does it work?" and if it does work then its a success and that's it!
This is the same pattern as last time. The only difference is that this time, armed with seam sealer to seal the extra seams, I made a gusset at the leg zip area. I hope they still fit over hiking boots. The previous version just had a zipper guard sewn to the zipper tape. The other difference is sewing Goretex rather than Pertex. It was actually much easier, although time consuming. You just sew the seam, trim the seam allowances and then iron on the seam sealer. It is the ironing that takes all the time. You can pin in seam allowances (especially those you will cut off), but mostly I used basting glue (washed off afterwards with a sponge and water). I also used steam-a-seam to help secure the hems. I read somewhere that as well as mircotex needles a long stitch length is the way to go for waterproof fabrics. The idea is to make as few holes in the fabric and to make them small. With my new machine I can change stitch length so I used lengths of between 3.5mm and 4mm.
The first torrential rain of rainy season was last night. James says the new trews are "great". I think they are relatively sexy too - for waterproof trousers.